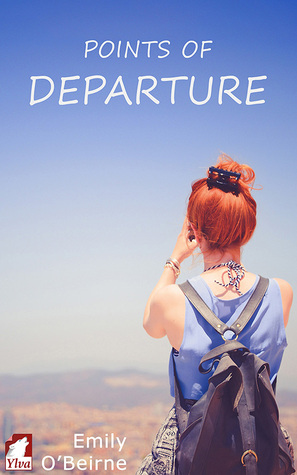 In this young adult novel, to be released June 2016, best friends Kit and Liza have been looking forward to this trip forever.


Five girls, five tickets overseas. It’s exactly what they all need after the final slog of high school. But when Kit’s suddenly forced to drop out, Liza’s left with three girls she barely knows.
There’s Mai, committed only to partying. There’s Tam, who already has her doubts about leaving her sick father behind. And there’s Olivia, so miserable about screwing up exams she’s not even sure she wants to get out of bed, let alone on a plane. Meanwhile Kit’s stuck working double shifts to pay off a debt, wondering if she’ll ever get it together.
All Liza wants from this trip is to discover a new version of herself. She just hadn’t planned on doing it without Kit by her side.
And they’re all learning that travel isn’t just about the places you go, but who you’re with at the time.

Liza finishes sorting her washing, climbs onto the bed, and kicks her legs over Kit’s.

Kit runs her hands along Liza’s sharp, brown shinbones, feeling that familiar bubbling of envy at her friend’s ridiculously great legs. Why can’t she have a body like that, instead of this short, scrawny one?

“Of course.” Kit pouts. “And you have to promise you won’t have too much fun without me.”

“And you won’t find a new best friend?”

Liza just looks at her. “I’ll be gone four weeks, Kit. Four weeks. I’m just hoping I can manage a conversation with these girls, let alone to make friends with them.”

“You’ll be fine,” Kit tells her for the thousandth time. “Mai’s fun. Tam’s a sweetheart, even if she seems tough. And Olivia’s awesome.”

Kit frowns as she thinks of Olivia yesterday. Kit’s never seen her friend so miserable. Olivia’s usually so assured and self-sufficient. But she’s so messed up over her exams and Will. Poor thing. She wants to tell Liza to look out for her while they’re away, but Olivia begged Kit not to tell anyone about exams. So instead, she just says, “Hey, Olivia might seem kind of, I don’t know, distant or whatever, but she’s going through some stuff, that’s all. Give her a chance. You’ll like her.”

Liza shrugs, like she’s only half listening, and continues to inspect her split ends.

Kit taps her fingers on Liza’s leg. “Anyway, who knows? Maybe you’ll meet someone on this trip. Have an exotic one-night stand with some Mediterranean hottie.”

“Maybe.” She stares out the window, her eyes closing against the sunlight streaming through the window. “Doubt it.”

Liza’s cheeks were even pinker the night of the end-of-school party, when she dragged Kit out to sit on the kerb, an uncharacteristic bottle clutched in her hand, and told her about this Alika girl.

The fact that her best friend was telling her that she had spent the last couple of months in some fraught, unspoken thing with a girl didn’t surprise her, exactly. But that Liza was finally saying anything to her about it did.

The fact that Liza might be gay had crossed Kit’s mind a couple of times over the years. It would explain why she’s so damn shy around guys. And it would explain why, at eighteen, she’s never had a boyfriend despite some of the incredible talent Kit has spotted at those athletics comps.

But even though she’d thought about it, Kit never said anything—in case it hadn’t actually occurred to Liza yet. And Kit had known that her best friend would tell her if and when she had anything to tell her.

And that turned out to be the night of their final classes. Liza was so drunk and fevered with her need to tell Kit about this mess she had gotten herself in, she skated right past the liking-girls news. Instead, she went straight to the part where she had started some clandestine thing with a girl in her training squad, an impossibly withdrawn, beautiful nineteen-year-old who was apparently barely willing to admit she was a lesbian to herself, let alone to someone else.

Kit kept her arm wrapped tightly around her Liza’s waist as she told Kit about this girl. Liza swiped tears from her eyes, telling her how the only time this girl seemed to acknowledge Liza was when she was jumping her in the car after competitions or climbing into her bed at night at the training institute. Not that Liza didn’t want to be doing that, she said. She just didn’t want it like that. And Kit just held on and let her cry it out. And when the tears were done, Kit wiped the tears from her friends face and told her to dump her.

It wasn’t until a few weeks later that they even broached the topic of Liza being gay in general, when Liza admitted how nervous she was about coming out to her parents, and about dropping two big revelations on them at once. But by then her coming out to Kit just didn’t seem like a thing. So why make it one? At that point, the fact that Liza had stopped talking to this girl who kept treating her like crap seemed way more important than workshopping her sexuality. That kind of seemed like a done deal at this point.

“Hey, does Alika know you’re leaving next week?” she asks

“Good,” Kit tells her, even if she doesn’t one hundred per cent believe her.

She looks over at her friend. She’s gazing out the window, a small frown on her face. Kit hopes Liza does meet someone. Someone who likes her out loud and who makes her feel like the awesome, beautiful person she is. She deserves it. Maybe even needs it a little. She’s the sweetest, most quietly funny and wickedly insightful person Kit has ever met in her life. And she thought that about Liza when they were eight. Now Liza and the rest of the world need to know it.

“I wish you were coming with us,” Liza suddenly moans.

“So do I.” Who wouldn’t choose four weeks of travelling in Europe over four weeks of working double shifts all week to pay off one party? Not even a good party. A party where she found Liam lying in the bath fully dressed with that stupidly hot Rachel perched on the end with her perfect pixie hair and MAC red lips.

Liza shifts across the bed so she’s lying next to Kit. She wraps her hands around Kit’s arm and squeezes it. “You were, like, the social glue.”

“I know,” she says again, resting her head against her friend’s shoulder. Kit’s already keenly aware Liza’s terrified she won’t get along with the others. What she doesn’t know is that everyone feels like that. Her cousin was furious when Kit broke the news. Olivia was even more depressed, and Mai told her outright that she was a stupid, freaking idiot.

She sighs. She will get her shit together this summer. She will. She grabs her friend’s hand and shakes it. “I’m so sorry, Lize,” she says for the zillionth time.

They lie there in a shaft of muted late afternoon sun. Kit listens to Liza breathe slowly next to her. She’s going to miss her so much.

“I’ll miss you,” Liza whispers, as if she’s heard her thoughts.

Kit snuggles up to her friend and smiles. “I’ll miss you, too.”

Thirteen-year-old Emily woke up one morning with a sudden itch to write her first novel. All day, she sat through her classes, feverishly scribbling away (her rare silence probably a cherished respite for her teachers). And by the time the last bell rang, she had penned fifteen handwritten pages of angsty drivel, replete with blood-red sunsets, moody saxophone music playing somewhere far off in the night, and abandoned whiskey bottles rolling across tables. Needless to say, that singular literary accomplishment is buried in a box somewhere, ready for her later amusement.
From Melbourne, Australia, Emily was recently granted her PhD. She works part-time in academia, where she hates marking papers but loves working with her students. She also loves where she lives but travels as much as possible and tends to harbour crushes on cities more than on people.
Living in an apartment, Emily sadly does not possess her dream writing room overlooking an idyllic garden of her creation. Instead, she spends a lot of her time staring over the screen of her laptop and out the window at the somewhat less pretty (but highly entertaining) combined kebab stand/carwash across the road. (from the publisher’s website)