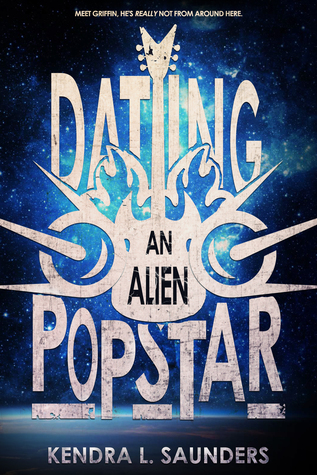 Synopsis:
Daisy Kirkwood has only just escaped her small-town life and run away to New York City, the land of last-minute secret gigs at famous musical venues, when she’s kidnapped by aliens. Unfortunately, no one ever writes about how to handle alienabduction in those fancy NYC guidebooks.

Griffin and Dev are supermassively sexy aliens from a politically and environmentally troubled planet who arrive on Earth with very little knowledge about human ways other than what they learned from a wayward E! News signal. Their mission is to pretend to be the most influential people on the planet—English pop stars, of course!—and gain the help of a powerful secret society. Upon arriving, they abduct Daisy Kirkwood, a nerdy young woman who loves music but could seriously use a bit of help in the love-life department. Though Griffin and Daisy initially squabble, neither can deny the intergalactic sparks whenever they’re too close to each other. Together, they must face murderous aliens, cultural misunderstandings, bad backup musicians, and the dark side of fame and the media, all set against a tight deadline…

Griffin raises a dark eyebrow. “Are you afraid of me?”

“Good.” He kicks off his shoes. “This will be a nice period of bonding for us, Wanda.”

“Why are you here?” I demand, sitting on the edge of the bed and crossing my arms over my chest. “You say you want to become the most powerful being on the planet with your music and all of that, but why?”

“It’s none of your business.”

“It’s my planet, so it is my business. You’re not planning to brainwash all of us, and then harvest our organs or something, are you? Keep our livers in jars in a spaceship somewhere? Burn the planet and then plant your weird medicinal drugs here?”

Griffin stalks closer to me with every word, until he’s standing directly in front of me, the glowing light in his eyes showing through the lenses. “And if I am, do you think you’re going to stop me?”

A shudder traces through me. I’m not sure if it’s because of his words or because he’s standing so close. “I’ll have to stop you,” I say in a very brave tone. Okay, actually, it’s not brave at all. More like a wheezy whisper. But Bjork or Kim Gordon wouldn’t just bow down to an alien invasion without at least attempting to protect their planet, and neither will I.

Before I can fully process what’s happening, Griffin’s pinned me down, holding my wrists against the bed under his hands. His body, though slight, feels substantial and warm against mine—simultaneously threatening and a bit of a turn on. “You don’t know me very well at all, do you, Wanda?” he whispers, and I want to correct him about my name, but I find it hard to say anything at all. “I would never come all the way to your planet just to enjoy the food and then destroy it. I’m not cruel!”

“I don’t know anything about you, other than your bad taste in clothes,” I say, but his weight pressed against my pelvis has my body pulsing and warm all over. Bad, bad, bad.

“Then look into me, why don’t you? You could see anything you wanted, if you’d just look. I’d let you.”

When I shake my head, he releases me, climbing right over top of me to take his place on the bed. I can feel the mattress shaking a bit, and I gather my wits enough to sit up and glance at him. He’s maneuvered his way out of the rest of his clothes, leaving only the underwear.

Thank God. Especially since my close proximity reveals he’s not doing too bad in that department. Even under a layer of fabric.

Griffin appears at my side as I lean over the sink, dotting blush onto my cheeks with my fingertips. I have no idea if he walked into the bathroom or if he teleported or something, but either way, I just glance at him in the reflection of the mirror and cock an eyebrow. “Yes?”

“Is that the Orgasm blusher color by Nars?”

He continues to peer at me. “But you want to create the appearance of female pleasure?”

“It’s… it’s just something we wear. It puts color in our face.”

“Why do you use blusher to do that? Wouldn’t it be easier to just experience pleasure?”

I laugh without really meaning to. “Women could never achieve any sort of pleasure that would last as long or look as good as makeup. Welcome to my planet.”

Griffin’s eyes narrow. “On my planet, a proper mating ritual would leave both beings in a state of pleasure for days, no paint needed.”

I’m fairly certain the bathroom lights flicker and that he’s the one causing it, so I attempt to turn my focus back to the task at hand. It’s not as easy as you might imagine.

As soon as I’ve applied an abundance of black eyeliner and mascara, I rough up my thick hair and blast it with the hairspray bottle provided by our hotel. It smells great and feels heavenly; it’s certainly the kind of thing used by rich people. Splurging on hairspray for me usually means buying the six-dollar can.

“You don’t go to Wolf Head looking like a bum,” I say, and then catch Griffin still staring at me. Hmmm. “You know; you could use a little rock edge.”

“Yeah, we’re gonna make you look like a proper pop star.” I tug him close and inspect his eyes; that odd blue color would look quite enchanting with the right amount of eyeliner. “Hold still, okay? Close your eyes and trust me.”

He squirms when I apply pressure with the pencil at the middle of his top lash-line, fighting me as if I’m going to hurt him.

“Hey! Stop it! I told you to trust me.” I wait until he’s still. “Now let’s try this again.” With a little work, I’m able to apply a steady line of kohl around his eyes, and then step back to admire my work. “Open your eyes; I’m done.”

Griffin blinks a few times, his eyes focusing on me. Judging by his tense body language and how tight his lips are pressed together, he didn’t particularly enjoy the experience, but I have a feeling he’ll get over it when he sees the results.

“Go look in the mirror.”

Whatever funk he’s in disappears as soon as he’s caught his reflection, replaced by a delighted smile. “I look bloody amazing, Wanda—like a proper pop star!”

I nod, quite proud of myself, but before he can leave the room, I say, “Why were you so nervous about me touching your eyes? Are your eyes sensitive?”

Griffin pauses just in front of the door, thinking for a few seconds. “No. They tried to blind me once, that’s all.”

Just before the concert, Griffin finally starts to show a little nerves. He paces back and forth, a short distance each time, his pointed features cast with shadows. Someone announces that stage time is two minutes, and Griffin fiddles with his guitar a bit, muttering to himself.

“You’re gonna be great,” I say, and he captures my hand a bit too tightly. His fingers feel colder than usual. “You okay?”

“She always told me to never give up.”

“Well, I’m sure she’d be really proud of you right now,” I say. “Go out there and show everyone in the universe who you really are. This time, they’ll all see the truth. I know they will.”

I can feel the air around Griffin warm up, as if the chill has been melted away from him. He leans in to catch my face between his hands for a kiss. Even with his guitar hanging from its strap between us, I pull him as close as I can and drink him in. With one last gentle ruffle of his hair, I let him go and step back.

Griffin and Frog Snout walk together toward the ramp that will lead them up to the stage. From the angle I’m standing, the ramp looks eerily a bit too much like it might lead into a bright spaceship in some cheesy science fiction movie. When Griffin steps onto it and turns one last time to smile at me, silhouetted against blinding lights, I have to struggle to just wave goodbye to him and not chase him up it.

I’ve never felt more left out than in this moment, especially when I hear a roar of cheers and screams from the crowd gathered out there.

Kendra L. Saunders is a time-and-space traveling fashionista author who writes books about magical, dark-haired men, interviews famous people, and suggests way too many bands to you via whatever social media platform she can get her hands on. She writes with good humor because humor is the best weapon for a girl who can't learn karate (or ballroom dancing).

She is the author of DATING AN ALIEN POP STAR, the magic realism novel INANIMATE OBJECTS, dark comedy DEATH AND MR. RIGHT, the upcoming romance THE UNLOVE SPELL, and has conducted interviews with NYT Bestselling author Jennifer L. Armentrout, goth rocker Aurelio Voltaire, and Project Runway winners Dmitry Sholokhov and Michelle Lesniak Franklin among many, many others.