Tour Excerpt: The Daughter of Ravenswood Series by Kim Cleary 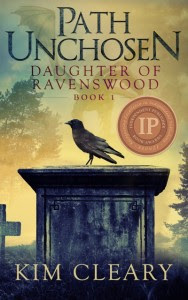 
When eighteen-year-old Judy Hudson discovers she’s a necromancer and sees firsthand the pain her powers can cause the dead, she wants to deny who she is. The zombie plague is long over. She wants to find a more normal life, a challenge when a beautiful, otherworldly man who claims to be her guardian saves her life.

But as Judy tries to set right the harm she inflicted on the spirit she raised, new zombies attack–zombies raised from among the long-time dead. Someone else just like her is out there, and he’s not trying to set anything right.

Now, to save her own life and protect the innocent inhabitants of the nearby town who’ve become her friends, Judy must figure out who’s raising the dead and why. She must also learn to control the darkness inside her–a seductive darkness that promises her power beyond her wildest dreams. 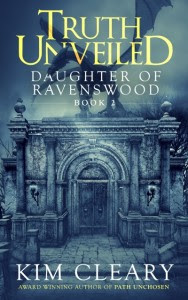 
Meagan Greystone, a new necromancer who grew up orphaned and homeless, has finally discovered a community where she belongs. But as she settles in at Ravenswood Manor, her ancestral home, a strange voice in her head unravels her newfound peace.

The source of the unsettling communication is Quintus, Meagan’s distant ancestor, known for his brutality and incredible power. When she attempts to enlist her father’s help by raising him from the dead, it’s Quintus who regains a foothold in the land of the living. Now reborn, he vows to obliterate everything Meagan treasures unless she joins him in his quest for power.

Meagan must overcome the heartbreak of unimaginable betrayal and fight in the face of a seemingly hopeless situation. Will she find the strength she needs to defeat the power of darkness and save the people and home she has grown to cherish?

He’d brought me here to kill me. What other reason could Father Andrew have for driving me to such a remote spot?

He dragged me toward a circular stone monolith. It stood close to the cliff edge, like an oversized dirty white doughnut that dominated the otherwise flat landscape. Waves crashed in the distance, and salt coated my lips.

I tried to pull my arm free, but he gripped my wrist even harder. There were no buildings in sight, not even a copse of trees to shelter in. Even if I could escape his grip, where would I run? I’d freeze to death before I could find help.

The stone seemed to watch me.

My heart froze and then pounded. Blood rushed around my body. I knew this place. I breathed in its faintly familiar smell, and my ears tingled to the thunder of the sea. I was too far to measure it, but I knew the stone stood twice as tall as I did with a round hole at hand height.

How could that be? I’d never been here before.

The stone called to me, teased me with sweet laughter. For a fleeting moment, I smelled flowers and saw children dancing. Was it trying to communicate with me? Telling me to trust it?

Father Andrew seemed oblivious to its power. At its base, he pushed me to my knees and droned out another prayer. I lowered my head and folded my hands but didn’t say the words.

“Father.” I coughed and cleared my throat. “What’s happening?”

He stopped his muttering. “I should have put you back years ago.”

A heavy weight pushed against my chest, the same weight I felt in the chicken shed. “What do you mean?”

He pressed his palm on the top of my head. “I found you here. It is best, for the sake of us all, that I bring you back.”

“But you said someone left me in a box—”

He squeezed my scalp. “You were left in a box, but here. I found you here.”

My leg muscles tightened, ready to carry me away, but my intuition told me to wait. I gulped deep breaths to calm the pulsing in my veins. He licked his finger, traced a cross on my forehead, and then trudged back to where Moppet waited in front of the wagon.

Father Andrew grabbed the blanket, strode back, and hung it around my shoulders. Tears tracked down his cheeks. He didn’t wipe them away. This time when he got back to the wagon, he climbed in and set Moppet to a fast walk. They grew smaller and smaller in the distance and disappeared.

He hadn’t killed me. He’d abandoned me here, where he found me. Was he giving me a chance to live, or did he expect me to die here? Delicate crystals of snow drifted to the ground in this surreal landscape. A pale gray sky hung so low a sudden urge to jump up and touch it filled my head.

I climbed to my feet and slumped against the monolith. Something clunked against the weathered stone. I pulled the forgotten watch from my pocket and traced my fingertips over the initials. BG—was this watch, these initials even connected with me?

Whiteness stretched out in all directions like a crisply ironed sheet. Snowflakes fell in my hair and eyelashes. The coldness of each one stung as it landed on my face.

At least the weathered stone blocked the wind. Where could I find shelter? Where could I go? Not back to St. Stephen’s that was for sure. Never back there.

Hunger gnawed at my stomach. Fatigue dragged my eyelids down. My legs gave way, and I fluttered into semi-consciousness.

Hot breath brushed against my neck, and strong hands lifted me from the snow. Warmth encircled me as if someone had wrapped me in a downy quilt, but it was a fleeting sensation before darkness surrounded me. 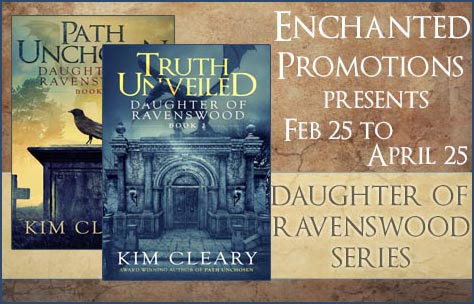 Kim Cleary is the award-winning author of Path Unchosen, the first title in the Daughter of Ravenswood series, which earned a bronze IPPY award in 2015. She grew up in Birmingham, United Kingdom, studied medieval history and psychology at Adelaide University in Southern Australia, and has worked all over Australia and in London.


Forced to leave a successful career in marketing after multiple sclerosis damaged her hands and prevented her from typing, Cleary learned how to write using voice software.

A self-described chocoholic, Cleary loves writing, gardening, cooking, playing with her dogs, and spending time with friends. She lives with her husband and two dogs, an adorable cocker spaniel and a mischievous moodle, in Melbourne, Australia.