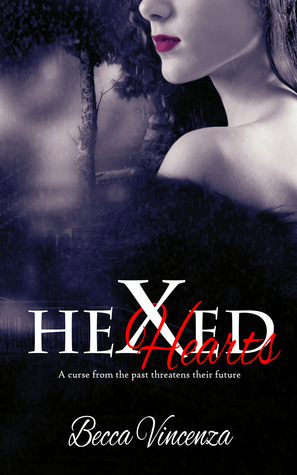 Colette had known all her life that she was half human and half werewolf. She had no expectations of a life filled with love and adventure.

Everything changed on her 21st birthday. A curse casted by witches centuries ago set things in motion, things she could have never imagined. A past that Colette has no clue about has come back to steal her away.

When Hunter, her destined but very unexpected mate, arrives, she is at a complete loss. She must learn to forget an old love and how to make room for a new love.

The curse is being recast and Colette must stop it in order to save the wolves, all the while finding who she really is.

“That is what you are going to wear?” I asked eyeing Griffin’s light blue t-shirt and dark washed jeans. He looked down at himself then looked at me.
“Why? What’s wrong with it?” he asked.
I narrowed my eyes. I crossed my arms and pressed my lips together. My nose scrunched a little. I looked down. I thought I was the epitome of a stealth mission we were going on. There was a lot of digging in my drawers and closet, but I finally found my black yoga pants and long sleeve shirt.Sure, the shirt was just a pinch too small. It rode up sometimes and the sleeves stopped just before my wrist. Unfortunately, it also stretched over my chest snugly. I saw Griffin take a couple peeks. Sometimes even he was a pig. I was seconds from slapping him. I grabbed the combat boots that I had owned for years and slipped them on.
“You don’t understand covert mission do you?” I muttered as I pulled on my last boot. I looked over at Griffin and he held in his laughter.
“Ass.”
“I heard that.”
“You were meant to,” I said with a smug smile.
Griffin clapped his hands together and I looked over at him. He had a huge smile on his face, the smile I had seen many times in our youth. I was glad for Griff, Liam and Nick.They knew how my childhood wasn’t a happy one so they made sure our childhood was full of adventures. Many of those adventures were not sanctioned by Keith, Isaac, or Rose. Most of the time, they were our secret, though as I got older I began to doubt Isaac hadn’t noticed our antics.
Griffin had the same look on his face as he used to when we would sneak out as children. I held in my own laugh now. It was nice to see the Griffin that I had grown up with, the one that kept me sane for years.
“Alright sir, let’s do this.”
Most of the bedrooms were on the second story of the house. Griffin could make the jump easily enough. I had more strength than a human but I didn’t trust myself not to break or at the very least strain something. I waited for him to go first and Griffin stood outside my window.
“Rapunzel, Rapunzel, let down your hair!” Griffin yell-whispered up to me. I rolled my eyes as I climbed out my window. I was going backwards and I could feel his eyes on my backside. I turned and stuck my tongue out at him.
“Why my prince I didn’t realize you were such a gracious ass.”
“Well when I see one, I see one.”

Becca Vincenza lives in wonderful Michigan. She has a love for Skittles, rainbows, Star Wars, and reading about hot men. When she's not wearing her author hat, she's working to pay off her student loans for her recently acquired English degree.

She recently released the first book in her Rebirth Series and is set to release the second book before the beginning of summer.

This one looks awesome, thank you!

Thank you for this great giveaway!

Interesting book, nice cover, but it doesn't appeal to me.

The cover is kick ass!! I really looked some of her other books, so will definitely give this one a try. Thank you telling us about the release and Ty for the chance at the giveaway. ❤️

I've heard her books are awesome.

Thanks for the chance at the giveaway! :)