These Royals will ruin you.

Easton Royal has it all: looks, money, intelligence. His goal in life is to have as much fun as possible. He never thinks about the consequences because he doesn’t have to.

Until Hartley Wright appears, shaking up his easy life. She’s the one girl who’s said no, despite being attracted to him. Easton can’t figure her out and that makes her all the more irresistible.

Hartley doesn’t want him. She says he needs to grow up.

Rivals. Rules. Regrets. For the first time in Easton’s life, wearing a Royal crown isn’t enough. He’s about to learn that the higher you start, the harder you fall.

Reading this book was a very bad idea today, maybe one of the worst ideas I have had in a while. You may think that I’ve learned something after reading the first three books in The Royal’s series but it seems that I’ve learned nothing.

This doesn’t mean that it’s a bad book. It’s a great book with an end that makes you pull out your hair.

“I might be small, but I have the lung capacity of a whale, so if you don’t move I’m gonna have to release the oral Kraken until the entire school is in this hallway rescuing me from you.”

Fallen heir left me with a bad taste in my month. Easton is my favorite Royal brother, even with his addiction problems he seemed the most down to earth of the five of them. He is truly sweet and even if he is a manwhore he doesn’t treat the girls bad. He is a genuine friend to Ella and I love him for that. But in Fallen heir it seems that the Royal blood got up to his head and he really believes that he is the center of the universe. Nobody can say no to him, he is just so amazing and can’t understand how someone can prefer the company of other people instead of his. He even gets jealous of Reid because Ella loves him, because until that moment Easton had been the favorite.

“You are drunk. And you broke your promise. You made a bad situation worse. Maybe you had good intentions, but you acted to make yourself feel better. You thought of yourself first and this is what happened.” 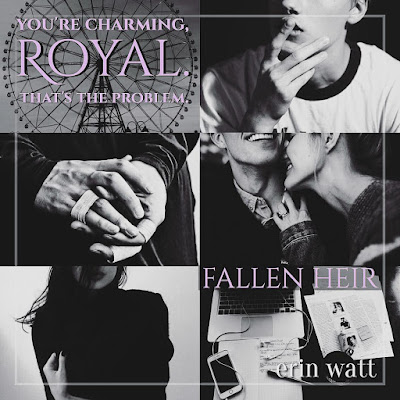 Hartley has true problems and doesn’t have the time to deal with a Royal, but Easton keeps pushing and in the end they become friends. But things are never easy with a Royal and Hartley is about to find out how much trouble Easton can bring into her life.

“You’ve caused me nothing but trouble from the moment I met you. So, please, for the love of God, don’t try to help anymore. Don’t help, and definitely don’t fix. You’re not capable of fixing things.” Sadly, she shakes her head. “All you do is break them.”

I will be honest, I was disappointed with this book. I expected something more from Easton, because all the Royals are already screwed to the head, but it’s a limit for everything. This doesn’t mean I won’t read the next book in the series because I can’t wait for it.

“I told you, trouble follows you wherever you go, Easton.”

Easton and Ella relationship is another important theme of this book. It isn’t that easy anymore for them to talk. Easton keeps bringing up Ella’s insecurities when he’s upset with the world and no matter how hard Ella tries to be a good friend and to support Easton it’s in vain. It doesn’t matter how many people love you, if you don’t love yourself life is a dead end.

She pushes on her tiptoes and pats me on the head, like I’m a little puppy. I don’t like that feeling—the one that makes me wonder if Ella thinks I’m five years old.

For those of you who loved Easton, Fallen heir is the book you’ve been waiting for, the chance of getting into his head. It’s an amazing opportunity to see another Royal brother learn some important life lessons.

Hi just read your review and it’s really good. I have to confess that I have an complete other view of Ella’s and East’s relationship now. But your’re totally right Easton has to learn that he has to love him self befor he can love any other person.
What more do you expected from East’s book.😱