Book Promo for Under a Million Stars by Rita Branches 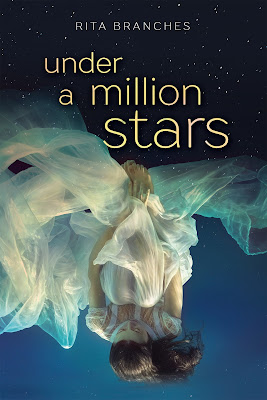 Summary from Goodreads:
Can a beating heart bleed from the shattered pieces?

Her heart cracked when her best friend walked away; it completely shattered when she lost her family in a tragic accident.

Now orphaned at seventeen, Charlotte Peterson is forced to live with her former best friend, Jacob Parker. Charlie, a talented pianist, desperately wants their loving friendship back, but something is holding Jake back. The more she spirals into the darkness of depression, the more she needs him.

Jacob vowed to stay away from her—no matter how much he still loved her. Armed with secrets that would have destroyed both of their families, he chose to end their friendship and walk away, which nearly killed him. As he watches the girl he once knew begin to fade away, however, he realizes that their relationship is more important than the truth he's hiding.

Now it's up to Jacob to put the pieces of Charlie's broken heart back together—even if it means revealing the secrets he so desperately wants to protect her from.
Will Jacob find a way to bring back the carefree, talented girl he once knew, or is it too late for both of them?

I was so curious to see where he was taking me that I didn’t pay attention to where I put my feet. I stumbled a few times before reaching the car door. He was serious, and I didn’t want him to give up on our stroll, so I kept my mouth closed. I focused on the landscape: the huge trees that shadowed the car. When we were closer to home, he turned onto a dirt road I knew well. After a few hundred meters, he turned again onto an even older road, where the car bounced on the potholes.

I sat straighter in my seat. “You’re taking me to…” I didn’t finish, but my heart started pounding. No, I hadn’t been there in two years. The last time was too painful to remember, and I didn’t understand why he was bringing me here again. Was he a masochist, or did he not care at all?

He parked the car far from the house, because the road was overgrown with bushes, but it just made the scene even more beautiful. The house was just as I’d remembered.

The abandoned farmhouse was situated just to the north of our town, where other houses started to sit farther away from each other. It hugged the south shore of one of the smallest lakes at the base of the mountain. It looked like it had been taken off the cover of a mystery novel, and I’d always loved it. Constructed of wood, the two-story structure was almost a hundred years old, and almost all of the windows were broken.

The front entrance was now covered with weeds; when we were kids, we kept them pulled, but now, with no one to care about it, they’d grown almost to the base of the windows.

Mr. Sullivan, the owner of the house and land that surrounded it, including the entire lake, lived in one of those homes for the elderly. He was almost ninety and had no close family. We’d met him when we were seven and used to visit my grandmother there, before she passed away. But Mr. Sullivan was a great friend of hers and we considered him family ever since.

I’d used to visit him all the time. He had never sold the house, because anyone who would have bought it was likely to destroy everything and build apartment complexes or luxury houses for the rich. He had never agreed to it, so I’d used to joke that, one day, this would be mine, and I would never sell it. Jacob and I would buy the house, restore it, and live there forever.

He’d smiled and said, “Oh, dear, I wish my wife and I had a daughter just like you. When you grow up, you won’t want to live there, though. It is too peaceful for a young person.” I had answered that I loved it because of the peaceful feeling emanating from it.

Jacob and I had used to come here all the time, ever since we were allowed to play alone in the street. This was our secret place; we’d gone through the small forest behind his house to come play around the house, inside it, or even in the lake, when the weather was warm enough.

When our parents had found out that we’d been coming here, they’d grounded us, saying it was too dangerous to be here alone and that the house was old and falling apart, which could hurt us. After that, we’d been more careful about not letting our parents know, but we’d still come to the house almost every day, until two years ago, when we’d kissed.

“Come on,” Jacob said, taking me out of my stupor. We climbed the weak steps that lead to the front porch, and I dragged myself to the front door, which earned me a frown from Jacob.

“Have you come back here, after…” I let the words drop, but his eyes were shadowed for a second, before he nodded, while kicking the door lightly to open it.

“A couple of times when I was… you know, down.” He looked around the hall before letting me in. One big hole greeted us, making the passage difficult. “I think a storm weakened the roof that gave in, there.” He pointed to the ceiling, where I could see the blue sky. “A piece of it fell on the already-weak floor—I almost fell through the first time I saw it.” I let out an involuntary shriek, and he frowned again. He could have been killed here and nobody would have found him.

“The rest of the house is still the same, with a few more holes and broken windows.” He stopped walking and talking the moment we reached the living room. It was exactly the way it had been the last time we’d been here. It would have been more normal if it had been empty, but it wasn’t.

We’d made a house of it, with a small sofa we’d found on the street, a mattress that had gotten too old for my mother’s approval, a couple of blankets we’d stolen from our houses, and boxes full of stuff our mothers had wanted us to get rid of, including some clothes and snacks that were probably spoiled by now.

Jacob had left the room exactly as it had been that day. I leaned against the door and braced myself for the pain that was bound to come at any second. I closed my eyes for a minute, and it was like I went back in time. The two years that had passed evaporated.

Hi! I'm Rita Branches. I was born and raised in in Portugal and I'm going to independently publish my debut novel in the Spring of 2016, Painting Sky.

I am so happy that you decided to take a look at my work.

Little bit about myself: along with being a writer, I am also a landscape architect. I started writing to bring 'to life' the stories that my mind created.
I LOVE to read. It was and always will be my passion.

When you've lost everything, how do you go on? Charlotte is about to find this answer for herself with the help Jacob. This is sure to be an emotionally pack story!