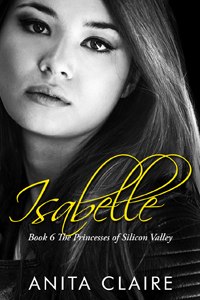 Synopsis:
Sometimes good things can come out of disasters
Isabelle is frustrated. All her friends are finding love while she's stuck living at home, with a lousy job, and a dysfunctional relationship with her on again off again ex-boyfriend.

Expanding her circle she joins her new friends for a fun weekend in the mountains, that turns into a disaster. Though sometimes good things come out of a disaster and maybe Isabelle's fortunes are changing.

Brother's Jordan and Jake are up in the mountains to mountain bike and water ski. Helping out Isabelle turns into more of an adventure then they ever bargained for.

Of course Isabelle has her band of college friends supporting her the whole way; dubbed The Princesses from their freshman year Halloween costumes.

This is a stand-alone book, but much more fun if read along with the other Princess stories.

Author Motivation:
All the princess books are coming of age stories. The main character progresses from college to becoming an adult. Overcoming an imbedded belief or coming to terms with adult issues is not always easy or pretty to watch. If I've done my job well as an author, there will be times when you yell at my protagonist to grow up, get their head out of their butt, or to stop worrying so much. Hopefully, by the end of each book, you will cheer the protagonist as they grow, change, and mature into an adult.

Of course these are all romance novels, so the center of each story is the protagonist as they embrace their wonderful partner.

As I sprawl across the bed in my childhood bedroom, I text Paul. Paul and I have had an on-again-off-again relationship for too many years, though right now we’re hanging out as friends.

Isabelle: What are you up to?

Paul is renting a house with two other guys, George and John. Everyone calls them the Beatles, even though they’ve yet to live with a Ringo, or even a Richard.

I knock on the door.

George and John are nowhere around. Paul’s sitting at his desk playing some kind of game on his computer.

Plopping down on the futon next to him, I say, “Isn’t that a game kids play?”

“All computer games are for kids,” he dryly comments.

Without looking up, he asks, “Isabelle, what’s up?”

“What else? If I hang around the house, my mom drives me crazy.”

Paul nods. He, too, has an overly critical Chinese mom and a mellow, white, Midwestern, engineer dad.

“When I have kids, I’m not going to drive them crazy. My other friend’s moms don’t drive their adult children crazy. I don’t think my mom realizes that her constant criticism and haranguing is counterproductive. It doesn’t make me want to do anything other than get away from her.”

“There’s a reason I’m not living at home. My childhood bedroom is empty and the refrigerator is always full,” he flatly says as he continues to stare at his computer.

“Yeah, but you have choices. All I can afford is to live with my parents. Do you know how depressing it is to wake up in your Pepto-Bismol pink bedroom and realize you’re twenty-four?”

“All I can say is figure out what you want to do with your life, then put together a plan and do it.”

I grunt in response. “Yeah, if only it was that easy. If I change my name to Ringo, can I move in with you guys?”

He stops what he’s doing and gives me a wry smile, which is totally alluring and reminds me why I’ve always fallen for him. “This place has three bedrooms. Do you want to move into my bedroom with me?”

Why does he still do this to me?

Pulling myself together, I tell him, “I think we’ve already tried that multiple times, even friends with benefits doesn’t work for us.”

“What do you have in mind?”

“Do you have your board with you?”

I shake my head.

He walks over to the corner of the room and picks up two skateboards. “Don’t complain about the board if you didn’t bring your own.”

We head outside to warm up. Paul’s about five eight. He’s in good shape, not overly muscular, but definitely toned. He has a disheveled, scruffy look that really works for him. He also has thick, pouty lips and piercing eyes. It’s a look I’ve always found compelling. Paul is two years older than me and was friends with my middle brother. I had a crush on him all through high school. The summer before I started college, we wound up working at the same science camp. It didn’t take long before we were dating. At first we were wonderful, but after we stopped working, we spent all our time together and quickly evolved into a constantly arguing couple. We have an uncanny ability to get under each other’s skin, while neither of us has a filter. We also have this bizarre chemistry, which draws us to each other, even when we know better.

Paul and I skate around his block and back to his house. I’m sure we both look ten years younger than we actually are. But it’s fun. Paul is trying to teach me some new tricks. I can do some of the easier ones. The guys have built a ramp that takes up most of their driveway. I have no problem dropping down the ramp and doing a “pop shuv-it’ to turn around. Now I’m learning how to do a Rock Fakie/ Rock ’n Roll. For this trick you hang on for a bit when you get to the top of the ramp, and instead of sliding back down, you use your downhill foot to turn your board one eighty degrees. I tend to fall off the board or chicken out when I need to make the one eighty turn.

Paul makes it look easy. “Is, you need more practice. Come on, I’ll hold onto you.”

I glide up the ramp, Paul grabs my waist, giving me the security I need to put the pressure on the back of my board. I manage to do the maneuver.

After the next successful turn with him holding me, he says, “One more time, this time I’ll hold my hands out. I’ll only grab you if you need me.”

I wipe my sweaty hands on my jeans and try the maneuver again.

“Good work, Is, I knew you could do it without help.”

Too bad we’re not always this good around each other. If we could hold it together, he’d make the perfect boyfriend.

“If only the rest of my life was this easy,” I say.

After a while, George pulls up. He and Paul were both computer science students at UC Davis. George waves to us before entering the house. A few minutes later, he comes back out dangling three beers from their plastic container. The three of us sit on the top of the ramp drinking our beers as we casually talk. As it starts to get dark, I head home.

Find more about the author HERE.