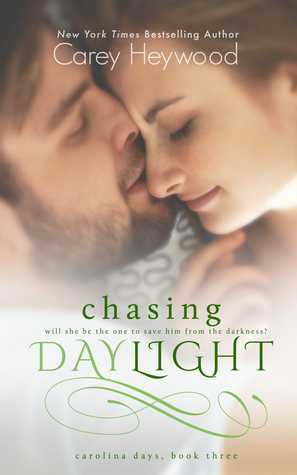 Synopsis:
Mitch Brooks exists day to day by keeping the world around him at arms length. There is no going back to the man he once was. That man was broken in a way there’s no fixing. Any hope outside of that is nothing but wishful thinking, until he meets her.

McKenzie Williams needed an escape. The last thing she needed was a scary beautiful man beating down her door in the middle of the night. Now, if only their paths would stop crossing, she could convince herself she didn’t feel a connection to him. Life has shown her the dreams she once held dear will never come true for her. Mitch struggles to get past the walls he’s built around himself while McKenzie works to build hers brick by brick. When the outside world exposes the vulnerabilities in his façade she abandons her own fears to stand by him. Will she be the one to save him from the darkness within him, or will he forever be chasing daylight?

What is that noise?

Lifting up from my pillow, I shake my head and listen for it again. I don’t have to wait long. A pounding strong enough to shake the entire building comes from downstairs. It takes me a moment to place where I am. The pile of boxes and trash bags in the corner are a quick reminder that North Carolina is a fresh start.

The pounding comes again and I hurry out of bed, grabbing my robe as I make my way to the stairs. Since the place isn’t opening for another month, I’ve been leaving the door to my unit open at night. Clinching my robe tight around my waist, I take the stairs two at a time. It’s a back stair, colonial style, letting out at what was once a kitchen. When I turn at the bottom of the stairs, I have a straight line of sight to the front door.

The view greeting me stuns me into to an unexpected standstill; so much, that my body rocks from the impact of it. The front door is steel with a window making up the top half of the door, steel trim surrounding it. There, lifting an arm that looks as thick as my leg is a mountain of a man.
Three things hit me at that moment; first, if I can see him, he can see me; second, it’s the middle of the night, and third, I have no clue what to do.
“Hey,” he booms.

I’m shocked the window is still intact not only from his pounding but from the impact of his voice. At the sound of it, I jump, but don’t move any closer to him.
“I need help,” he continues.

At that moment, I realize he has only knocked with one hand and is cradling something in his other arm.

The roots holding my feet in place retreat, and without thought, I dash to the door and begin unlocking it. There’s the regular door handle lock, a deadbolt, and a slide lock at the top of the door. Tugging the door open the stranger wastes no time in advancing into the room. I step out of his way and move toward the light switch. Once the room is flooded with light, my brain processes the sight before me. He has to be 6’4 maybe even taller, with dark brown hair at least a year past its last haircut, and a face that’s at least half a month overdue for a shave. His shoulder stops my perusal of him, or rather what’s over his shoulder.

“Oh, my God. What happened?” I ask, rushing over to look at what appears to be a German shepherd he’s holding.

“He’s wheezing and vomiting. I don’t know why.” I gulp at the tremble that was unmistakable in his words. My mouth drops as my eyes fully connect with his golden brown ones for the first time.

His brows furrow and he half turns to glance out the still open door and to the clearly illuminated sign that says 24 hour Critter Haven and Spa.

“We don’t open for another month,” I stammer in an attempt to explain.

His head turns back to me, the gold in his eyes no longer panicked, now hard. “Save my fucking dog.”

His words whip out like a physical blow and I lift my hands to protect myself. It’s now that I fear for my safety. Now, after letting in a stranger, a giant one who is clearly not in his right mind, I’m afraid.

New York Times and USA Today bestselling author with six books out and many more to come. She was born and raised in Alexandria, Virginia. Ever the mild-mannered citizen, Carey spends her days working in the world of finance, and at night, she retreats into the lives of her fictional characters. Supporting her all the way are her husband, three sometimes-adorable children, and their nine-pound attack Yorkie.