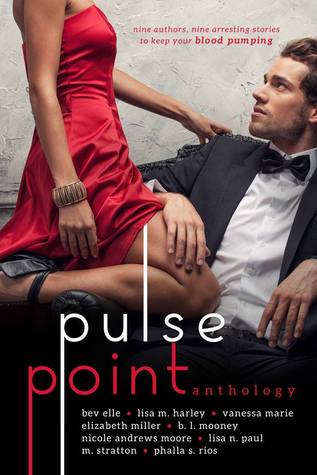 Nine Authors, nine stories and over nineteen hundred pages of romance come together in this anthology to raise awareness and benefit the American Heart Association. Heart disease is the No. 1 killer of women. Help us make a difference. Go Red and Speak Red. All proceeds of this anthology will go to the American Heart Association – Go Red for Women campaign.

Midnight by Elizabeth Miller: One destined meeting. It alters journalist, Charlise “Charlie” Carter’s course. When asked to work on a Republican candidate’s campaign, she’s unprepared for the intense reaction she has toward the young, handsome presidential hopeful, Colin McKenna. Unable to resist Charlie’s allure, McKenna succumbs to his desire and they find themselves exploring a passionate, physical relationship that is soon tested by not only their own secrets, but his political advisers.

Not at First by Phalla S. Rios: Falling for two men at the same time was something Angel Mabbott never expected to happen. Leaving a past full of pain and loss in California, Angel is determined to make something of her life when she starts college in Minneapolis. But life takes a turn when she finds herself torn between Kevin and Roman.

Commitment to Love by Bev Elle: A preacher’s daughter is torn between passion and her faith convictions when she meets a handsome police officer who is a womanizing commitment-phobe with abandonment issues.

One Hot Summer by Lisa M. Harley: “Whatever you say, Mrs. Mason. It won’t happen again.” He mumbled under his breath, “Until you ask for it.” AnaBelle Mason is a lonely widow trying to run the farm her husband left her. Tray Thompson is a college student majoring in beer and girls. Will One Hot Summer together change their lives forever?

Fade to Black by M. Stratton: She was a single mother, happy running her gallery, he was a famous movie star who never wanted to get married. Neither can deny the instant attraction. Neither knew there was an ex-lover who’d do anything to make sure they stayed apart.

Striving for Perfection by B.L. Mooney: She thinks perfection is a gimmick. He thinks it’s an illusion. Can they get past each other’s imperfections to make it work?

Heartless by Vanessa Marie: Charlie has good reasons for keeping her bruised, damaged heart to herself, but Sam will do whatever it takes to break down her walls and force his way in. Until they discover that their relationship is off limits. Will Charlie deny her own happiness to protect everything her teacher has worked for? In a broken heartbeat.

Stormy Surrender by Nicole Andrews Moore: Joe Masters, a fiery ginger, had a smile that could charm the pants off of any woman he met. Marti Whitaker was recently burned by a charming man. Their romance promised to be stormy unless one or both would simply surrender.

Storm Front by Lisa N. Paul: Love knows no bounds when two people are destined to be together. One fights to maintain the distance; while the other battles to close the gap. Will Ashley Kynde and Ryan Baker move forward together or will they finally close the last remaining door to their past?

“So good. It’s too good . . .” he mumbles against my mouth. And it is. So intense and so good my toes curl as I wrap my legs around his backside. I’m close to overwhelmed, the feel of him buried in me, knowing I’m really here in this moment, and his voice whispering in my ear to hold on, don’t hold back, give me everything . . . I almost can’t hold on, falling deeply into every sensation and losing myself in them.

I’ve never done this with someone and felt connected in every possible way, not just physically, but emotionally. A rush, a warmth spreads out from my chest at the realization that this is my beginning—a spring in the middle of winter, the ending of a chapter and the start of another, with Colin as the central character. Right here, in his bed, clarity reigns as his mouth claims mine again, teasing out a moan so he can claim that too. He owns me. I would give him anything. Take it, take all of me, take everything and anything. And he does, wringing out every ounce of pleasure. He knows where to touch, how to extract the smallest whimper and the largest groan. I could never tire of being with him, with him over me and in me, pushing, pulling, driving and devouring until the ache becomes a need. A need so intense and all consuming, I begin taking from him. Calling out unabashedly to move faster, go deeper, push harder. Don’t stop, never stop, never stop making me feel this good and needy and so, so full. Please, I beg. Pleading with him, pleading for I don’t know what . . .

Pushing off of his shoulders, I fall to the bed and he follows, his head dipping to my nipple. Taking me into his mouth, he teases with his tongue and bites down, hard, only releasing me when I gasp and clutch his hair. But I don’t pull him away; I hold him in place. I want more. He does it again and this time I go a little wild, raking my fingers down his back and bucking my hips up to meet the increased pace of his.

Everything he’s doing is magnified in the pulse between my thighs. It started as a slow flutter when he first entered me, but it’s built into a steady cadence. I focus on the feeling of him. I’m climbing high, fast, and he's coming with me. Throwing my head back, I relish in our connection, kneading my fingers into his back, his muscles flexing with control as he pushes me to a place I’ve never known, didn’t know existed.

I can see the moment when he loses it, loses himself as I have done. Gone is the controlled restraint and in its place is a wild abandon. Giving in to my demands, his hips thrust with a determined pace, driving forward, pushing harder until each strike elicits a guttural grunt from him and an exacting cry from me. Sweat pebbles on his brow, beading and rolling, dropping to my chest where it slides between my breasts. I watch, fascinated, as his eyes follow it down and the black of his pupils blur into the blue with a need so powerful it would scare me if I didn’t feel the exact same way.

My mouth finds his, licking and sucking and tasting. Who am I, but a needy, hungry woman begging for the only thing that can save me? Colin. Only him, it will always only be him. I give myself fully, joining him in the freedom to feel beyond good, beyond words.

“Don’t let me fall.” Sudden panic overtakes me as my body threatens to tumble from a cliff.

“I’ve got you, baby,” he whispers. “We’re going to fall together. Come with me.” The whisper turns to a demand, forcing me to hold on and together, we dive head first into an abyss of pleasure so deep and plentiful we drown in it, breathe it, and live through it.