Life can change in the blink of an eye. One moment, Lily is trapped in a loveless marriage. In a split second she is free, but at what cost? Her mundane life is set into a freefall of tragedy and terror. Her husband may be out of her life, but he left a storm of collateral damage behind and the burden is on Lily to sort it out.

Fate connects Lily with Gavin, a charmingly handsome British gentleman that has been drawn into her tangled circumstance. Gavin is everything Lily’s husband wasn’t and gives her hope that love really does exist. Gavin wants nothing more than to sweep Lily up and carry her off into the sunset, far away from the devastation left behind by her husband. Gavin has been the first breath of fresh air in her life, but she isn’t looking to be saved. She needs to clean up her husband’s mess and find a way to save herself in the process.

Does she throw caution to the wind and open her heart? Or listen to her head that tells her and go it alone until she’s found herself again?

My house is a crime scene, I’m completely alone, and I can’t call a single friend. I’m so mad at Ashton I want to scream, but I’d have to yell pretty damn loud for him to hear me now. My head drops into my hands, and I rub my temples hoping to fight off my growing migraine. After a few minutes, I feel someone sit next to me. I fan my fingers and look up to see Gavin’s hypnotic eyes. I get lost in them for what feels like eternity.

Gavin takes my hands away from my face and gently wipes the tears away. Then he wraps his long, muscular arms around my shoulders, and I allow myself to lean into him. This man, whom I’ve known for about twelve hours, whose wife was killed by my husband, is the only person in the world I have left. 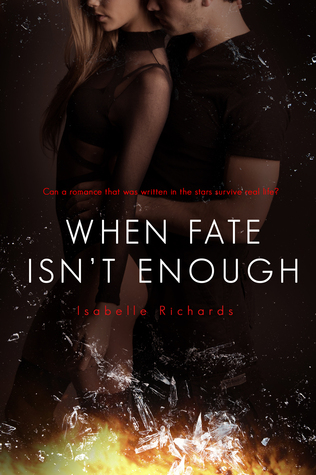 Isabelle Richards spent years as a speech writer before tackling fiction. An avid reader of all genres, Isabelle is drawn to romance novels as they provide an escape from daily life. Through her complex cast of characters, Isabelle creates a sanctuary for readers to dive into for a break from reality. When she is not writing, Isabelle works as an advocate for persons with disabilities in Washington, DC. Her two yellow labs are her writing partners, although they frequently sleep on the job.

When fates collide an amazing cover appears! Too bad it's not a movie so that we can hear Gavin's british accent :)