Cover Reveal! Before He Was A Secret by Becky Wicks 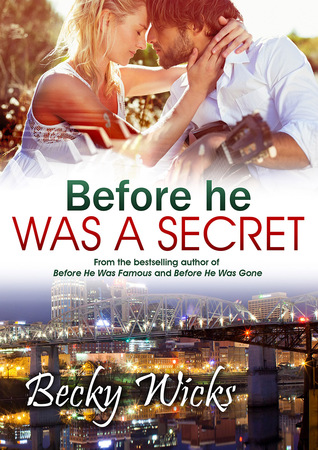 Synopsis:
Another standalone Starstruck romance from the HarperCollins author who brought you Amazon #1 bestseller Before He Was Famous and Before He Was Gone

“What if we can’t choose
Every battle we win and lose
What if we decided years before, to live this life, to fight these wars
And all the dreams we ever thought were ours
Were written in the stars”

Waiting tables isn’t exactly what singer/songwriter Stephanie has in mind for her move to Nashville, but memories of the past and a case of writer’s block mean inspiration isn’t coming easy. When brooding pianist Conor Judge opens his mouth in a smoky bar he proves music can heal, and even help you re-write your story, but a history of his own means the one thing he starts to want most is always just out of reach. Stephanie.

Enter Travis Flynn – an upcoming star who won’t take no for an answer, and a record label intent on helping Stephanie shine, without Conor. As fame comes knocking as hard as the ghosts of their pasts, it soon becomes clear that no matter how hard you might fall in love, having the perfect songs doesn’t always mean perfect harmony.

I close my eyes for a moment, trying to control my heart palpitations as the memories of that day crash over me like a tsunami. ‘I just prefer the guitar,’ I stutter. Breathe.
Breathe.

It’s just a stupid instrument.
‘Ah, but the piano is a different species,’ he carries on, almost in my ear. ‘You know, someone told me once that the white keys represent happiness, all the good stuff. The laughter, right?’ Conor runs his fingers quickly up and down the white keys, stops abruptly, looks to me. ‘And the black keys? They represent the sad times, the sorrow, the pain.’ He does the same on the black keys now, slowly, a different melancholy sound that makes me shudder involuntarily. ‘But you can’t forget,’ he says, bumping my shoulder gently, ‘they all mix up together to tell your story. You’re a little bit of everything at the end of the day. You’re a song.’
‘I’m a song,’ I repeat as he jumbles a tune under his hands.
‘Yes. You need to play me your story.’
I stand up again. This is all ridiculous. I’m ridiculous. ‘I don’t want to play my story on that, or anything,’ I tell him, reaching for my purse.
He stands up after me, grabs for it. ‘Because it’s harder to write a sad song about something real sometimes, than it is to write a happy one about nothing, I know,’ he says as I wrestle with him to keep my purse on my shoulder.
‘No you don’t know,’ I say. He’s blocking my path, stopping me from walking out the door again. I flop against the wall, focus down at my feet. ‘I’m not like you Conor, I don’t have all that… history. Not the good kind, anyway.’
‘What do you mean?’
‘You can write songs about anything you want. Love, for example.’
‘Stephanie…’
‘I’ve never been in love, Conor. Not like you and Grace, anyway.’
His face is inches from mine and I catch the darkness flicker in his brown eyes at my words. ‘That’s my past, Stephanie. Who’ve you been talking to?

Becky Wicks lives in Bali and scribbles books, and she’s mostly powered by coffee. Her first book in the Starstruck Series, Before He Was Famous recently reached #1 in Amazon’s Coming of Age and New Adult & College categories, and her three travel books, published by HarperCollins are online to make feet nice and itchy. Mostly though, she loves to write love stories. She blogs most days and always welcomes distractions on Twitter. Especially if you have photos of cats.