Book Promo: Excerpt and Giveaway! Unhidden (The Gatekeeper Chronicles, Book #1) by Dina Given 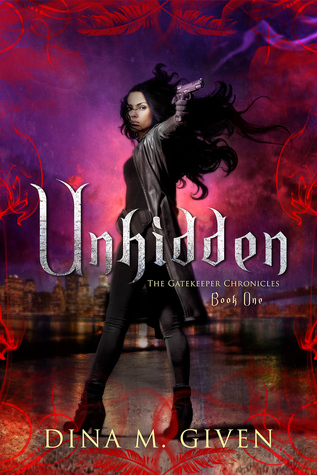 It’s not always easy to differentiate between the good guys and the bad guys, especially when a trained killer may be falling in love with her evil hunter…

Emma must use every skill in her arsenal to stay alive as she tries to solve the mystery of why she has been targeted. Her list of enemies keeps growing - from Zane Shayde, an evil Mage, to a secret branch of the US government - and she doesn't know if there is anyone left she can trust.

To complicate matters further, Emma is inexplicably drawn to Zane in a way she does not quite understand, even knowing her life is forfeit if captured. Who is he and why does he have this affect on her? How can she fight someone who calls to her, body and soul?

Emma is left haunted by questions, doubts and fears as to why she has been targeted, when they will come for her next, and how she will possibly survive against an enemy she doesn't understand.

I body checked him so he stumbled through the doors, hitting the far wall of the elevator. I followed him in, keeping my gun pointed at his chest, then pressed the only button inside the elevator that would take us to the bottom of the shaft, fifteen stories below ground. The doors slid shut, and with a jerk, the elevator began moving.

It was only when my prisoner began to change that I realized it might not have been the most brilliant idea in the world to cage myself into a small box suspended over open air with a complete stranger. I had once again forgotten I was potentially dealing with a supernatural enemy, and I shouldn’t have assumed my tail was only a normal human being.

The man standing huddled in the corner straightened to his full height of only ’five-foot-ten, and his eyes began to glow a pale yellow.

“I’m more of a lover than a fighter …” he said, his voice becoming deeper and rougher with every word. I heard the snapping of what I realized were his bones, and his skin bulged and rippled as if something living beneath it was trying to get out. His face elongated, and wickedly sharp teeth extended from what was quickly becoming a muzzle. “But I can dish out a pretty good disemboweling,” he completed in a growl before the transformation of his mouth prevented any further human speech. His clothes tore away as his limbs bulged and bent. He fell to all fours as course, gray hair sprouted over his entire body.

Cold terror bled through my body, filling my veins with ice as I tried to remember all the rules I had seen in movies about taking down a werewolf. I had no way of knowing whether there was any truth to them, but it was all I had to go on. Unfortunately, the bullets in my gun were made of steel, not silver.

He completed the transformation from man to wolf in a matter of seconds, although even before then, I had put three bullets into him. I continued to hold out hope that I could interrogate him; therefore, I didn’t aim for his head. Instead, I blew out his knee, trying to incapacitate him.

I was surprised when the creature actually let out a yelp of pain as a spray of blood and cartilage hit the back wall of the elevator, and the wolf’s leg collapsed under it. He still had three good legs, though, and he lunged at me with snapping jaws.

I got off another two shots, but they went wide, missing him as he barreled into me. I managed to keep hold of the weapon, but the wolf’s jaws clamped down on the gun. Unfortunately, the muzzle was not pointed into his mouth; thus, pulling the trigger would just put a bullet harmlessly into the wall of the elevator.

I needed the gun though. I wasn’t about to let go of it. With my free hand, I punched the wolf square in the muzzle, raining repeated blows on its face, my hand going numb as my knuckles split and bled, but I kept hitting him. His eye was a bruised and swollen mess, and blood poured freely from his nose.

When I felt his jaws loosening, I pushed past the pain in my hand and hammered him with one final fist to the nose, throwing my entire body weight behind it. He released me, and I brought up my gun, but he was changing again.

Thinking he was shifting back into a man and conceding the fight, I held my fire. Instead, his muzzle sharpened and hardened into a point. His gray fur sprouted feathers, and his arms extended into broad wings that flapped wildly. His injured leg was less of an impediment now that he could fly.

He lifted from the floor and dove straight for me. I ducked, instinctively raising my arms to protect my head and face. He hit the wall behind me yet recovered quickly and flew at me again.

Staying low, I tried to get a bead on him with my gun, but he was moving too fast. The cramped elevator wasn’t large; however, this form made him quicker, more capable of tight turns, and gave him more room to maneuver since he could take advantage of the air space above my head. He launched at me with talons bared and sliced through my forearm as I shielded my eyes. The pain was sharp and intense, and blood flowed freely from the lacerations.

Dina Given lives in rural New Jersey – home of farms, horses and the largest hot air balloon festival in North America – with her husband, two crazy kids, and one rescue dog. She is an exercise enthusiast and avid lover of food and wine (hence the need to exercise). Dina also works full time for one of the largest healthcare companies in the world. She attributes her ability to juggle family, work and writing to her obsessive, hyper-focused, Type A personality.