Book Promo: Excerpt and Giveaway! Falling Away by Penelope Douglas

Synopsis:
Jaxon is the guy she’s supposed to avoid.  K.C. is the girl he won’t let get away....

Jaxon Trent is the worst kind of temptation and exactly what K.C. was supposed to stay away from in high school. But he never forgot her. She was the one girl who wouldn’t give him the time of day and the only one to ever say no. Fate has brought K.C. back into his life—except what he thought was a great twist of luck turns out to be too close for comfort. As the bond between them grows, he discovers that convincing K.C. to get out from her mother’s shadow is hard, but revealing the darkest parts of his soul is nearly impossible.…

“You’ve got some ego,” I bit out. “I mean, yeah, all of a sudden you have money. Where you get it from is too scary to even think about,” I spouted off when I really should just shut up. “And you seem to have the town’s police in the palm of your hand. You’re clearly running the Loop now. Congratulations, Jax.” I smiled a big-ass, fake grin. “You’re the most powerful man in Shelburne Falls, Illinois!”

I planted my hands on my hips, pretty damn pleased at how good I’d gotten at putting men in their place.

But then my smile dropped and my eyes rounded. Jax’s eyes—full of challenge and amusement—narrowed on me, and he tossed his towel down, heading right for me.

Shit. I knew I should’ve listened to my mother. I talked too much.

He nodded, a grin playing at the corner of his mouth. “There she is.”

I inched back to the wall as he advanced into my space. “What are you talking about?”

“The snarky girl I met at Madoc’s house years ago.”

Yeah, the one that was slightly drunk and hella confident? My head bobbed off the wall, signaling I was at a damn dead end, and a trickle of sweat skidded down my neck. I saw Jax’s eyes flash to it, and all of a sudden I was too dumb to even remember my own name.

God, he was big. My chest vibrated with the heat of him only an inch away. He hovered over me, engulfing and consuming the space around me, making me feel as if I stood in the shadow of a tree.

Staring straight ahead, I made a conscious effort to keep my face straight. But it was almost impossible, and it was pointless. Out of all the reasons I could come up with for hating Jax—he always challenged and pushed me, and he always did whatever the hell he wanted—I could never claim that he wasn’t smart. He knew I was affected. He knew my body liked him close.

“I love it when you get mouthy,” he whispered down on me. “It makes me want to shut you up.”

Son of a bitch. I clenched my thighs together, feeling the moisture there.

I needed to get out of here. “I have to go.” I pushed off the wall but hit his chest, closing me in again.

“How do you like your community service?” he said low, trapping me by planting his hands on the wall on each side of my head.

His smell was raw heat. Summer. Sticky cotton candy on a Ferris wheel and cool water on hot skin.

“What?” He’d asked me a question. What the fuck did he just ask?

He leaned on his hands, dipping his head close to mine. “Community service, K.C. How do you like it?”

I could hear the laughter in his voice.

“I don’t,” I mumbled. “Teaching a bunch of kids who slacked off during the school year, because they didn’t get the attitude adjustment they needed, isn’t my idea of a good time.”
His arms lowered a bit, and I could hear him inhaling through his nose, as if he was smelling me.

“Your idea of a good time got you here in the first place.” His voice was calm but firm. “And those kids don’t need an attitude adjustment. You do.”

I smirked. “Well, I’m getting one. Thanks to the great state of Arizona.” Then I pinned him with hard eyes. “You don’t know me, Jax.” And I pushed him away and turned for the door.

But he hooked my arm, pulling me back.

“You’re right,” he said quickly. “I don’t know you. So why don’t you enlighten me? What does
K.C. stand for? What did you do at college that got you arrested?”

When I just stood there, not answering his stupid questions, he backed me into the wall again. “Let’s try something easier, shall we? Your favorite color. What is it?”

“Is it?” he pressed. “How about music? Who’s your favorite band? What about books? Your favorite genre? When was the last time you ate chocolate or stayed in your pajamas past eleven in the morning?”

I didn’t know if the walls were closing in or if it was just Jax crowding me. “What are you getting at, you little shit?” I accused.

And he got in my face, smiling at the challenge of my condescending name-calling. “How about a shower, K.C.?” The sound of his deep, husky voice swirled in my stomach and shot downward.

He stared at my mouth, looking hungry. “The little shit—who’s not so little anymore—needs a shower,” he whispered, still staring at my mouth. “Take a shower with me. Right now.” 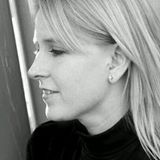 I had not read any Penelope's books yet. I'd like to.

I just hate how Falling Away ended, I cand'y wait to read Aflame

Thank you for the chance to win, hope to get a chance to read the novel.

The Falling Away series sounds great. Thank you for the giveaway.