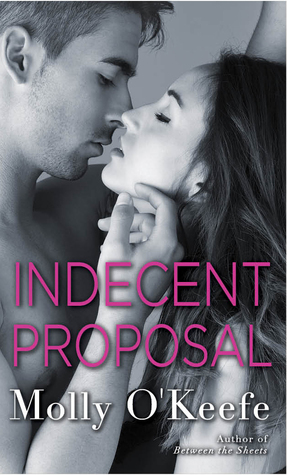 Perfect for readers of Susan Mallery and Rachel Gibson, Molly O’Keefe’s gritty and sensual tale of passion and politics features the brother of the heroine from the author’s beloved novel, Never Been Kissed. He’s a driven man who refuses to be distracted—until he meets a beautiful bartender who just may change his life.

With his chiseled jaw and his thick blond hair, Harrison Montgomery was born to lead. Four generations of Montgomery men have served the state of Georgia and now he’s next in line. Harrison, though, is driven to right wrongs: namely to clean up the political mess left by his father’s greed and corruption. But Harrison must first win his congressional bid, and nothing can get in his way—not even an angel who served him whiskey and gave him a shoulder to lean on and a body to love for a night. Problem is, she’s pregnant. Scandal is brewing and there is only one solution: marriage.

Damage control? Ryan Kaminski can’t believe that a cold, calculating political animal now inhabits the body of the emotionally vulnerable stranger who’d given her the most unforgettable night of her life. Really, she doesn’t want anything from Harrison, except to be left alone to have her baby in peace. But Ryan is broke, jobless, and essentially blackmailed by Harrison’s desperate family to accept this crazy marriage deal. For two years, she will have to act the role of caring, supportive wife. But what is Ryan supposed to do when she realizes that, deep in her heart, she’s falling in love.

Ryan tossed a black bar towel towards a scowling Lindsey and sauntered over to Ken Doll’s corner. There was a weird energy rolling off him tonight and the air in this small part of the bar was electric and still. Humid from the water burning up on the heat of his body.

“The usual?” she asked, waiting for him to look up at her so she could smile.

He ran a hand through his blonde hair, sending water droplets into the air.

Finally, he looked up at her and the distracted but polite distance she was used to seeing in his sky blue eyes was replaced by a sizzling, terrible grief. Or anger. She couldn’t be sure. Not that it mattered, really.

“Whatever,” he said, his voice low and broken. “Just bring me whatever.”

She poured him Lagavulin and barely had the tumbler on the bar in front of him before he grabbed it and shot it back. “Another,” he said.

Two more shots later, she brought him a glass of water and a menu.

“Thank you,” he said, glancing at her through impossibly long eyelashes. But he pushed the menu away.

“My name is Ryan,” she said. “Apparently I’ll be the woman getting you drunk tonight.”

His laughter was dry, like wind through November trees, but he didn’t say anything.

“And your name?” she asked. “That’s usually how it works, in case you're unfamiliar. I tell you my name, you tell me yours-“

“Harri- Harry. You can all me Harry.” His voice was laced with traces of the South, pecans and sweet tea.

She held out her hand and after a moment he shook it. “Nice to meet you, Harry,” she said.

Molly O'Keefe is the RITA Award winning author of over 25 books and novellas. She lives in Toronto, Canada with her husband, two kids and the largest heap of dirty laundry in North America.

thank you for the chance to win :)

Thanks for the giveaway! There's something about southern guys...

I like a fella who can hold his Lagavulin. Slàinte mhath!

thanks for the chance!