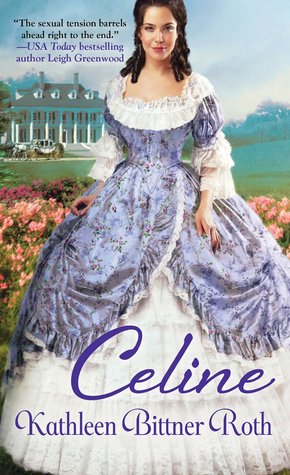 He stepped off a jewel of a sternwheeler onto one of the most beautiful plantations in all of Louisiana. And into her life.

Celine’s breath caught in her throat. Heat smoldered in her belly. What a sensual man. The scion of the Andrews family carried an aura of personal magnetism so powerful, a sensation close to fright swept through her. She stood still and aloof, masking her emotions. His intense gaze seemed almost a physical touch. She held her head at a proud, haughty angle, not flinching from his bold scrutiny.

In seconds, Trevor regained his cool, casual air. A lusty grin caught at the corners of his mouth, and fire danced in his eyes as he bent ever so slightly at the waist, tipped an imaginary hat, and strode casually into the house.

She would never be the same...

From Plantation era New Orleans to the untamed American West, here is the sweeping, unforgettable tale of a headstrong young beauty and the man she is destined to love.

“Put me down!” Felicite squealed merrily, not meaning a word. Trevor laughed and tossed his head back. His gaze caught Celine’s. He ceased swinging his sister in midair and set her down gently, never once taking his eyes off Celine. His lips parted and he stood as if transfized.
Her breath caught in her throat. A vague fire smoldered in her belly. What a sensual man. He carried an aura of personal magnetism so powerful, a sensation close to frightening swept through her. She stood still and aloof, masking her emotions. His intense gaze seemed almost a physical touch. She held her head at a proud, haughty angle, not flinching from his bold scrutiny.
In seconds, Trevor regained his cool, casual air. A lusty grim caught at the corners of his mouth, and a fire danced in his eyes as he bent ever so slightly at the waist, tipped an imaginary hat, and strode casually into the house.
Damnation! Celine hurried along the gallery back to her room.
Slamming the French doors behind her, she kicked off her slippers in a fury, sending one crashing against the door across the room, the other falling squarely in the fireplace. She sat on cushions in the window seat still in a frazzle over being caught spying. Her face heated at the embarrassing thought. She wrapped her arms around her legs, set her chin to her knees, and stared blankly out the window, her emotions in a whirl.
Being caught lurking on the gallery wasn’t all that was bothering her.
Puzzlement washed through her. Why be so upset because a man returned home? An aqueous haze clouded her vision. She swiped at one corner of her eye. How in heaven’s name could there be any tears left?  Hadn’t she cried them all out two weeks ago over Stephen’s grave? Here she thought she’d healed in mind and body, but she’d only managed to fool herself into thinking so.
It suddenly dawned on her that in the year she’d lived with the Andrews family, she’d never once stepped off the land but to visit the cemetery. Life at bucolic Carlton Oaks was busy, but predictable as the setting sun. And safe. Had this predictability given her a false sense of how to face the world again once she ventured beyond the plantation’s boarders? So she wasn’t angry at Trevor’s return after all. She was frightened of venturing forward in life; that’s what all the unwanted emotion was about.
Trevor’s returning to Carlton Oaks had upset the plantation’s daily routine – including hers. Worse though was what the mere sight of him did to her insides. Good Lord, from where had those volcanic feelings erupted? Such unrealistic yearnings had been buried so deep before her marriage, she had all but forgotten them.
There had been a time when she and her best friend, Dianah Morgan, had sat under a tree reading erotic books they’d clandestinely transported in their closed parasols. She’d often awaken at night covered in a sheen of perspiration after one of her sensuous dreams. But when she married, she sadly decided the authors had played a cruel trick on her. Reality proved to be little more than a few minutes of fumbling around in the dark under a bunch of nightclothes.
Mere fantasy – that’s what Trevor Andrews represented. Any debonair man stepping off a jewel of a sternwheeler, and making his way along a lovely tree-shrouded path to one of the most beautiful plantations in all of Louisiana, was bound to stir romantic notions. Especially in a woman spying on him who’d spent her idle youth tasting forbidden fruit in the form of unmentionable books.
She reached into a pocket hidden in the seam of her dress and pulled out a letter from Dianah, one she’d carried around far too long. The Morgan family, having recently relocated to San Francisco, had invited Celine to live with them in their new luxury hotel.
A shaft of pain shot through her heart at the idea of leaving a place – and people – she had grown to love. But there was no family left, nothing to tie her to Louisiana any longer. Tonight she would cease her procrastinations and accept Dianah’s invitation.


Celine sat in the window seat for nearly an hour, sorting through her thoughts and fitting all the past year’s events into a jigsaw puzzle in her mind, Trevor’s coming home being the final piece. She convinced herself that with all the confidence she had gained over this past year she could handle him in proper perspective, not like some schoolgirl sitting under a tree reading romantic fantasies – she was a grown woman, nearly twenty-one.

Born in Minnesota, Kathleen Bittner Roth has lived all over the U.S.: Idaho, Washington, California, Texas and New York. Currently, she resides in Budapest, Hungary, often called the Paris of the East. Kathleen has won countless awards for her writing, including finaling in RWA's prestigious Golden Heart contest. She is an active member of Romance Writers of America, including the Hearts Through History chapter and has been a contributing editor for an online romance magazine as well as writing and producing successful seminars and meditation CDs.

You can learn more about Kathleen and her books at www.kathleenbittnerroth.com