Tour Excerpt & Giveaway Not Quite a Wife by Mary Jo Putney 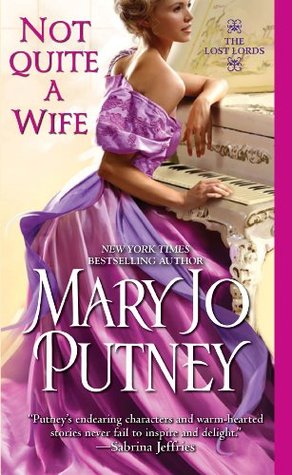 Marry in haste, repent at leisure.

James, Lord Kirkland, owns a shipping fleet, half a London gaming house, and is a ruthlessly effective spymaster. He is seldom self-indulgent…except when it comes to the gentle, indomitable beauty who was once his wife.

Laurel Herbert gave James her heart as an innocent young girl—until she saw him perform an act of shocking violence before her very eyes. That night she left her husband, and he let her go without a word of protest.

Now, ten years later, a chance encounter turns passionate, with consequences that cannot be ignored. But as they try to rebuild what was broken, they must face common enemies and a very uncommon love….

Neither of them wanted to say goodnight, so she suggested they descend to the kitchen for a midnight supper. She scrambled eggs and herbs and cheese while he made tea and toasted bread. Laurel knew basic cooking because her mother thought it was a woman’s duty to understand everything in the household, but she was impressed that Lord Kirkland was not totally baffled by a kitchen.

Daringly Laurel produced a bottle of her father’s best white wine to accompany the meal, and their conversation continued through the night. Kirkland encouraged her to talk about herself, and his genuine interest was intoxicating.

Kirkland in his turn told her amusing stories about the clashes between his parents. His aristocratic English father had married a strong minded Scottish merchant’s daughter for her fortune, and exchanging vows was the last time the pair had agreed on anything. Kirkland’s preference for his down to earth Scottish relatives had resulted in his father sending him off to the Westerfield Academy after his parents separated.

Though his anecdotes were witty, Laurel could hear the pain and loneliness of the little boy he’d been. Only later did she learn that he’d revealed more of himself in a single night than he’d shown her brother in years of friendship.

Their tête à tête ended when the cook came yawning into the kitchen to start the day’s bread baking. She laughed and shooed them away to return to their beds for the hours before the rest of the household rose. Laurel left the kitchen reluctantly, fearing that the magic of the night would vanish by morning.

But it didn’t. Instead of escorting her to her room, Kirkland took a detour to the music room, where dawn’s first light was brightening the chamber. Setting his hands on her shoulders, he said with quiet conviction, “Laurel, I do believe we should marry. Shall I speak with your father this morning?”

Her jaw dropped. Despite the intensity of their hours together, the idea of marriage shocked her. This man, this brilliant young lord, wanted her for his wife?

She stammered, “I…I believe the correct answer is, ‘Sir, this is so sudden!’”

“Yes, it is,” he said softly, his gaze holding hers. “But I’ve never felt surer of anything in my life.”

She drew a shaky breath, wanting to say yes but realizing how mad this conversation was. “Why me? Surely you’ve met many females who are richer, more beautiful, more knowledgeable.”

“Perhaps. But as soon as I saw you, I knew you were the one I’ve been looking for,” he said with stark honesty. “We can take all the time you want to become better acquainted. Just…please, don’t say no. I need you.”

The power of his certainty swept through her like a summer storm and found matching certainty in her soul. Though she had never believed in love at first sight, now she did. There was much they didn’t know about each other, but she believed on a level of deep truth that they belonged together.

Thinking she must be mad, she hesitantly tested her conviction by standing on her toes and giving him a shy kiss. His lips were warm and firm. Intoxicating. He caught his breath and slipped his arms around her waist, returning the kiss with slow tenderness and a yearning so deep she could feel it in her bones.

From the moment they’d met, she’d known he was a passionate man. Now she discovered that she was a passionate woman. She had been kissed a few times by young men of her acquaintance, and found the process only mildly interesting.

But with James Kirkland, her body and soul caught fire. She pressed against him, her mouth opening under his with eager exploration. No wonder men and women made fools of themselves for love, she thought dizzily. She wanted to sink into him, merge into one. She wanted him to sink into her….

Kirkland was the one to end the kiss, his breathing jagged as he locked his hands around her upper arms and retreated a step. “I…I hope that means you are at least willing to consider my proposal.”

Doubts banished, she smiled up at him, happier than she’d ever been in her life. “I do believe you’re right. We should marry, because I can’t imagine ever feeling this way about another man.”

Mary Jo Putney is a New York Times and USA Today bestselling author who has written over 60 novels and novellas. A ten-time finalist for the Romance Writers of America RITA, she has won the honor twice and is on the RWA Honor Roll for bestselling authors. In 2013 she was awarded the RWA Nora Roberts Lifetime Achievement Award. Though most of her books have been historical romance, she has also published contemporary romances, historical fantasy, and young adult paranormal historicals. She lives in Maryland with her nearest and dearest, both two and four footed.