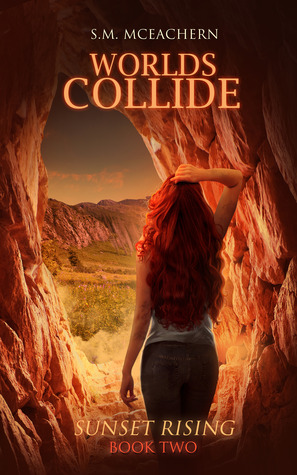 In a desperate attempt to escape execution, Sunny O’Donnell and Jack Kenner find a way out of the Pit and into a world still believed to be toxic with radiation. Under the brilliant sun for the first time in their lives, they not only discover that the earth has healed from nuclear war, but there are people outside the Dome.

In Worlds Collide, the second book of the Sunset Rising trilogy, Sunny and Jack must continue a life of subterfuge in order to stay alive and find a way to free the Pit. But in their attempt to save the urchins, they uncover the horrifying truth about President Holt and the evil he could unleash on the world. 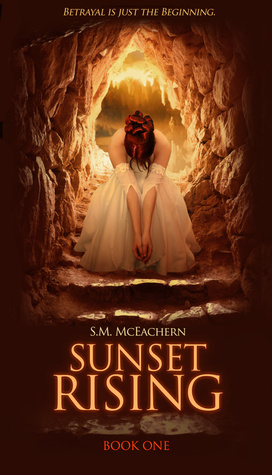 The drops soon gathered speed and turned into a downpour, as if someone had turned on a showerhead. It made a drumming noise against the hard-packed earth, which came as a surprise. I had no idea rain made a sound.

Everyone on the training field carried on as though there wasn’t a storm in progress. Dena continued with her tour. It wasn’t until a flash of light lit up the sky that Dena said it was time to go inside. The unexpected flash was blinding, but it was the booming noise that followed that sent me careening into Jack’s side. For just an instant I wondered if it was an attack.

Jack’s shoulders shook with barely concealed laughter. I shot him a look. “As if you’ve ever been in a storm,” I said.

The trek back up to the courtyard was a little trickier on wet ground. As we went, the lightning became brighter and the thunder louder. Jack’s sunglasses weren’t much protection. I never thought I’d be relieved to go back inside a mountain again, but I was.

Pausing inside the entranceway to shake the water off, I took in the big empty room—what was once the lobby of the hotel. The grotto was made entirely of stone tile with high arched ceilings. The ghostly outlines of bygone furniture hinted that the hotel was once quite grand, but now crumbling tiles and dark stains ground into the stone had robbed it of its beauty. I rubbed the toe of my boot against one of the dark spots, wondering what it was.

“Human misery is a stubborn stain,” Dena said. “A lot of skeletons were found here, the floor darkened by their decay.”

A shiver went down my spine when her meaning registered. How many people had sought refuge here after the war, only to die a slow horrible death? Were they from the valley? Were they the same people who had been turned away from the Dome by the bourge? The stains of decay were everywhere. For a moment I closed my eyes against the mental image of what they must have had to clear out of here in order to reclaim this building.

Behind me the door opened and a few people entered the lobby. They glanced in our direction and continued to the far side of the room.

“The entire hotel is built inside the mountain, hidden to the outside world,” Dena said.

I watched the small group open the bags they carried and spread out blankets on the floor.

Jack pointed to the artificial lighting. “You’ve made your own light?”

Jack looked a little embarrassed by his question. I had thought the same thing until Jin-Sook had corrected me. As much as I professed that these people weren’t heathens, I still made assumptions about them, as though they wouldn’t be as smart as we were. But as we walked through the reclaimed ruins, I was reminded of the ingenuity of the human spirit. As someone who came from the Pit, this was not something I should’ve forgotten.

"Sunset Rising" is S.M. McEachern's first novel. She says the idea for the story first came to her in the 1990s when she researched a Bio-Dome experiment in Arizona for an academic paper. The thought that the world might one day need a Bio-Dome to escape a global catastrophe set her imagination into overdrive. And the ethics behind such an idea formed the backdrop for Sunset Rising.

Her goal in writing the novel is to entertain the reader with an interesting plot and colourful characters.

Thanks for the great giveaway and chance to win!