Review! Falling Under by Jasinda Wilder 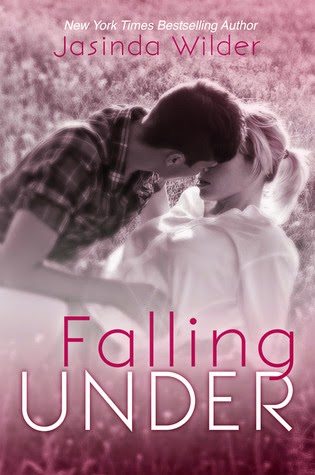 My name is Colton Calloway. You've heard part of my story, but it turns out there's more. My little girl, Kylie, is all grown up. Seventeen, beautiful, and talented, just like her mother. And just like Nell, my daughter seems to have fallen for a bad boy, one with a lot of darkness and a lot of secrets.

You thought you knew the whole story. You thought it was over. Happily ever after for everyone.

My name is Oz Hyde, and you’ve never met me. I’m part of the story, too, but I’m an aside, a quick line or two you’d all but forgotten about. Well guess what? I’ve got my own story to tell.
Buckle up, ‘cause this is gonna be a hell of a bumpy ride.


I loved every second of this book and I'm not sure I can do it justice with my review but I'll do my best.

First of all, let me tell you, Jasinda sure knows how to surprise us. I wasn't expecting this. Sure, I wanted to read more about Nell and Colt but this is so much better.

Falling Under happens almost twenty years later and it's the story of Kylie, their daughter.

Colt and Nell have done well for themselves and are now famous singers. The past is behind them and she seems to have recovered well enough. They still perform but not often. Having their own recording studio gives them the opportunity to help struggling singers.

Kylie has grown up in a warm and loving environment, with two wonderful parents and her best friend, Ben. He's Jason and Becca's son and they've been inseparable since they were small children. Just like her mom and dad, she loves music but she lacks confidence. Being the daughter of Colt and Nellie also means that she has to be the best and make it on her own.

Oz is a troubled young man. He's always been on the road. His mother moves around a lot, uprooting him every time he gets used to the new environment. And this is how they end up in Nashville where he meets Kylie.

He's instantly attracted to her - the gorgeous girl with long strawberry blond hair, beautiful blue eyes and a body to die for who doesn't fall for his crap.

She challenges him from the beginning and won't stay away no matter how hard he pushes her, so they end up spending more and more time together.

We don't know much about him except that he has his own issues which he expertly hides. Music also is a refuge and this is what connects him and Kylie in the first place.

There's no tragedy or major drama like we've seen in Falling Into You. Jasinda has created Oz's character to suit Kylie. He's pretty normal, except from the fact that he hides behind creepy t-shirts and heavy-metal music. When she meets him, he's already on the way to recovery just not there yet. He just needs that final push and she's the one that will trigger the change in him.

It's strange to see Colt as a father. Took some getting used to it. He adores Kylie and he'd like to protect her from every harm, especially when he sees a little bit of himself in Oz. It's nice to see how close they are and to see that there's still something from the old Colt inside him. The part where he tries to talk to her about safe sex? OMG, that was priceless. I love him!

Ben is another matter altogether. He came across as a spoiled brat and a bully. Not my favorite person in the book.

In the end, an accident will reveal hidden truths, reconnect old friends and be the beginning of new bonds. And the way this story ended? Beautiful. I had tears in my eyes. I can't say anything about it without spoilers so you'll just have to read and see for yourselves.

Great job, Jasinda! I'm so glad you decided to surprise us with this book. I absolutely loved it! I really hope this isn't the end 'cause I need more of Colt, Nell, Kylie and Oz and I think I'm not the only one.