Tour Review & Giveaway! On the Rocks by Erin Duffy 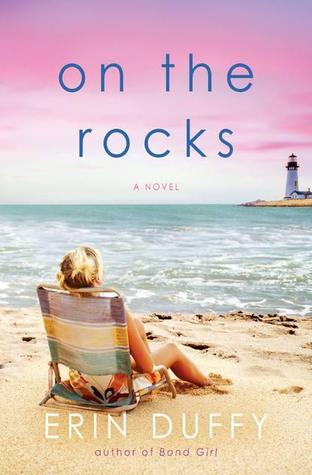 A heartwarming novel about friendship, family, and finding love in the Facebook Age-the perils, pitfalls, and dubious pleasures of being a modern young single woman-from Erin Duffy, the author of Bond Girl

Six months ago, Abby's life fell apart for all the world to see. Her longtime boyfriend-turned-fiancé, Ben, unceremoniously dumped her-on Facebook-while she was trying on dresses for the big day.

When the usual remedies-pints of Ben & Jerry's, sweatpants, and a comfy couch-fail to work their magic, her best friend, Grace, devises a plan to get Abby back on her game. She and Abby are going to spend the summer in Newport, in a quaint cottage by the sea, enjoying cool breezes, cocktails, and a crowd of gorgeous men.

But no matter how far away they go, Abby and Grace discover that in the era of social media-when everyone is preserving every little detail of their lives online-there is no real escape. Dating has never been easy. But now that the rules are more blurred than ever, how will they find true love? And even if they do, can romance stand a chance when a girl's every word and move can go viral with a single click?


I really liked this book. It has a slow start and Abby will drive you insane in the beginning but don’t give up. Believe me, it gets better.

You can read a little bit about the story in the synopsis. Abby is dumped by her fiancé, Ben, via Facebook while she is trying to pick a dress for the wedding.

Now, at 31, she finds herself single and brokenhearted. To top it all, her little sister just told her she’s getting married and her poor excuse for mother is making her feel like crap because, by allowing her jerk fiancé to walk away, Abby robbed her of the chance to show off in public. So, she chooses to wallow in self pity and eats her weight in ice cream almost every day until she can’t fit in her clothes anymore.

Enter the crazy best friend, Grace. She made it her mission in life to pull Abby from the abyss she’s slowly descending into and get her back to the way she used to be.

Easier said than done. But maybe a summer in a pretty little cottage on the beach might just do the trick.

And here’s where the fun begins.

In Rhode Island, Abby finally meets Bobby, Grace’s friend since college, and Wolf. He’s a huge guy who came from Germany to work in the US where he met Bobby.

These two are something else entirely.

Bobby likes to irritate Abby by pointing out all her flaws and, in spite her protestations, he appoints himself as her wingman and decides to help her find new men.

Wolf is some kind of backup and he’s funny as hell especially since he doesn’t quite masters the English language very well. Especially certain expressions.

- “Oh, you got wet feet,” Wolf said, nodding sympathetically. “I understand.”
We shook our heads in unison. “The expression is ‘cold feet,’ Wolf,” I said.
“Why would cold feet keep you from doing something? Wet feet are way more annoying than cold feet.

- “Oh no, I’m so sorry, little Gracie,” Wolf said sympathetically. “Let’s go hammer ourselves! That will help,” he suggested.

“The term is ‘get hammered,’ not ‘hammer yourself,’ ” Bobby said. “Saying ‘hammering yourself’ means you’re going to beat yourself with an actual hammer.”

See what I mean?

Most of the conversations in this book are completely insane.

And let’s just say that Abby isn’t exactly ready to start this whole dating thing again after she’s been for almost 12 years in a stable relationship.

She doesn’t understand certain things and has a habit of pushing guys away by being sarcastic or snarling at them most often than not.

The fact that Bobby is always there pointing out each and every mistake doesn’t help either. And let’s not talk about her penchant for always attracting weird ones.

She even made me cringe a time or two.

Keep in mind that this is not a love story. This is a book about life, relationships and friendship and I’m sure you’ll love it just like I did.

Erin Duffy graduated from Georgetown University in 2000 with a B.A. in English and worked as a trader on Wall Street, a career that inspired her first book, Bond Girl. She lives in New York City.