Tour Excerpt & Giveaway Tryst (Take It Off #8) by Cambria Herbert 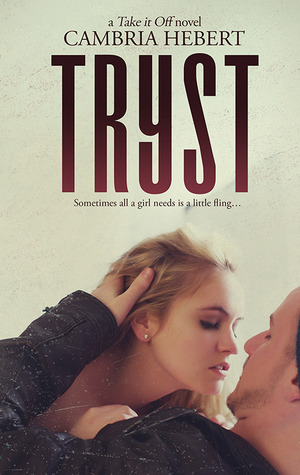 Sometimes all a girl needs is a little fling…

Since she caught her cheating, loser husband in bed with his assistant, her life has been on a steady spiral—right into hell. Her car’s a junker, her job sucks, and her perfect, gorgeous sister likes to brag about her wonderful life every time they “do” lunch.

In an effort to salvage what’s left of her life and her sanity, she takes the advice of her kooky best friend and takes off to Topsail Island. A week at the beach, alone, is exactly what she needs to recharge, regroup, and relax.

Only, her alone time is about to get derailed.

Gavin Palmer’s favorite activity is walking around in his boxers and eating junk food. He and his neighbors have an understanding. They stay out of his business and he stays out of theirs. He lives at the beach, not for vacation, but for isolation. He’s had enough of people to last him a lifetime.

Gavin’s isolation is interrupted when his normally quiet neighbor starts disturbing his peace. He stomps across the sand to give the guy a piece of his mind… only it isn’t a guy.

She’d maddening, nosy, and talks too much.

But she’s hot and her bedroom eyes have him thinking maybe he’s had enough solitude. Maybe a week of company is exactly what he needs.

Maybe what they both need is a no-strings-attached tryst.

Just as the road started to gradually lift and lead onto the bridge my car made a very loud clunking sound and then groaned like it was going to come apart at any second.

Even though my foot was pressed on the gas the car slowed considerably, idling along like a turtle who had no where it needed to be. “Come on!” I yelled at the dashboard as I gave the steering wheel a smack.

Suddenly the wheel seemed extremely hard to steer. What usually was an easy, effortless task now seemed like something that required large muscles.

Did I mention I was lacking in the muscle department?

I applied the brakes and fought the Jetta to the side of the road. I wasn’t about to try and make it over the bridge like this. My luck I would plunge over the side and get eaten by a shark when I hit the water.

The loud rattling sounds the stupid car made drowned out the cadence of the ocean waves and caused some of the peace I was found on my way here to disappear.

After several long moments of just sitting there, leaning my forehead on the steering wheel and asking God why I was cursed I turned off the engine. The car stuttered and then died. I knew it wasn’t going to turn back on.

“And the hits just keep on coming,” I said out loud.

I opened the car door, letting it open so that the light would stay on for a few moments and bent down to look for the hood release latch. After I found it and popped the hood I stood there staring down in the dark at the insides of a car I couldn’t see.

Then I remembered my phone. The flashlight app was handy in moments like this. Even with the engine and innards of the car visible I had no clue what was wrong with it.

“I am so getting a new car,” I sighed. I called up the number to Triple A in my phone (I might not know how to fix cars but I knew how to call people who did) and wondered how long it would take them to send a tow.

A pair of headlights appeared traveling in my direction. I raced around the side of the car and leapt into the driver’s seat, slamming the door behind me. After the way this week was going I would not be surprised at all if the person behind the wheel of that car was a serial killer out looking for his next victim.

The car slowed and pulled directly behind my car.

I heard the slam of the door and watched as a large dark figure approached. I could make out nothing because his headlights turned him into nothing but a dark shadow.

The only thing I knew for sure was that it was a man. Unless of course it was a woman. Judging from the sheer size of the black shape if it was a then she would have to be a professional body builder.

Seconds later a darkened face appeared at my window.

“Car trouble?” he rumbled. His voice was deep and his southern accent was strong.

I forgot my window was down!

I jammed the key back into the ignition and turned the engine over. It made a puny, pathetic sound and stalled out. The windows were electric. I couldn’t get it up if the car wouldn’t start.

A laugh floated through the night air and wrapped around my body. He put one of his hands on the door, so that it rested where the window should be, his fingers falling down the inside of the door.

I snatched the keys out of the ignition and swung down to stab the fleshy part of the back of his hand. Seconds before I made him bleed he jerked away.

“I’m not going to murder you!” he shouted.

“I stopped to see if you needed help. You know, because your junker car here stopped working.”

“How dare you call it a junker.” I fumed. My car definitely was a junker but I wasn’t about to let him insult me. I’d had enough of men to last me a lifetime.

“Sweetheart, I call it like I see it.” he drawled.

Damned if I didn’t get goose bumps. His voice was like the velvet sky I was admiring only moments ago. “Well, okay, it’s a piece of crap.” I allowed. Obviously his southern accent was making me stupid.

“I’m just going to take a look,” he said. Before I could tell him no he was walking around the front of my car. The glow of his headlights gave me a glimpse of the way his hips rotated when he walked.

He had long legs, the kind that owned the ground whenever he took a step. He was tall… he had to be at least six two. Other than that I couldn’t make out anything else about him. He was wearing a baseball hat and it was pulled down low, shading all of his face from the little light out here.

A light clicked on up front (he must have the same app as me) and I saw him reaching down into the engine. The sound of something being pulled out of the car had me leaping out of my seat and rushing around the front.

“What the hell are you doing!” I demanded horrified as he pulled out this long black thing. “Is that a snake?” I shrieked. Had I somehow run over that giant thing and it got caught in my engine?

He paused and looked up at me. “A snake?” he asked like he couldn’t understand what I was saying. Then he shook his head. “It’s the drive belt,” he muttered, going back to pulling it out.

“Well if it’s supposed to be in there why are you pulling it out?”

“This way when I go to kill you, I know you won’t be able to get away.”

Cambria Hebert is the author of the young adult paranormal Heven and Hell series, the new adult Death Escorts series, and the new adult Take it Off series. She loves a caramel latte, hates math and is afraid of chickens (yes, chickens). She went to college for a bachelor’s degree, couldn’t pick a major, and ended up with a degree in cosmetology. So rest assured her characters will always have good hair. She currently lives in North Carolina with her husband and children (both human and furry) where she is plotting her next book. You can find out more about Cambria and her work by visiting http://www.cambriahebert.com