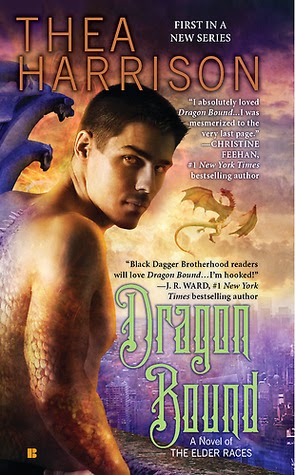 Half-human and half-Wyr, Pia Giovanni spent her life keeping a low profile among the Wyrkind and avoiding the continuing conflict between them and their Dark Fae enemies. But after being blackmailed into stealing a coin from the hoard of a dragon, Pia finds herself targeted by one of the most powerful—and passionate—of the Elder Races.

As the most feared and respected of the Wyrkind, Dragos Cuelebre cannot believe someone had the audacity to steal from him, much less succeed. And when he catches the thief, Dragos spares her life, claiming her as his own to further explore the desire they've ignited in each other.

Pia knows she must repay Dragos for her trespass, but refuses to become his slave—although she cannot deny wanting him, body and soul.


Let me tell you from the beginning that I love dragon books. I devour every single novel on this theme that I can get my hands on. I have a few books/series that I like but Elder Races is my favourite.

Pia Giovanni has been blackmailed into stealing from Dragos Cuelebre’s hoard by her ex boyfriend and this is how she found herself on the run from one of the most powerful creatures in the world.

Dragos is the only dragon in existence and the most ancient creature. He’s the lord of the Wyr demesne and no one steals from him and lives to tell the tale.

No one except a beautiful woman who seems to get under his skin even when she’s not there.
Let me tell you a little bit about the world created by the talented Thea Harrison since this is the first installment in the series.

In the Elder Races books we come across a large variety of creatures such as dragons, elves, fae, djinns, vampires, gryphons, gargoyles, thunderbirds, harpies, and weres of any kind.
They live alongside humans and have a power structure of their own.
The United States, where most of the stories are based, are divided in seven demesnes superimposed over the human geographical map.

Anyway, Pia’s actions have a series of consequences that make this book a fun and enthralling read so much so that you won’t be able to put it down.

Dragos, for the first time in his life, is intrigued by someone and his reactions to Pia are hard to understand. He breaks all kinds of rules and he’s ready to face any danger if it means he’ll have her in his life.
Pia has been taught by her mother to always be careful, to trust no one and never get involved with anyone. The day she stole a penny from the dragon’s lair she’s broke all her mother’s rules and now he’s hell bent of learning the truth about what and who she is and he won’t take no for an answer.

Together, they are combustible, funny as hell and a force to be recon with.
Some of the situations are downright hysterical and seeing Dragos struggling with his feelings will make you laugh out loud.

“I am cursed with a terminal case ofcuriosity,” he said. “I am jealous, selfish, acquisitive, territorial and possessive. I have a terrible temper,and I know I can be a cruel son of a bitch.” He cocked his head. “I used to eat people, you know.”
If he meant to shock her out of crying, he succeeded. A snort burst out of her. “That’s awful,” she said.
Her nose was clogged. “I mean it, that’s awful. It’s not funny. I’m not laughing.”

“So, is that your long, scaly, reptilian tail, or are you just happy to see me?”
No, she did not just say that.
Did she? She cringed in mortification, screwed her eyes shut and waited to be splattered all over the beach.
Nothing happened, good or bad. Yet. Maybe if she kept her eyes closed it wouldn’t.
She whispered through shaking lips, “I didn’t mean to say that. Um, pay no attention to the lunatic inhabiting this body.”

She leaned forward and staggered, as she confided in a whisper, “You’re the sexiest guy I’ve ever seen too. You know, your long, scaly, reptilian tail really is bigger than anybody else’s. Not that I’ve been with very many guys. Or was comparison shopping or anything.” She hiccuped and watched him worriedly as he guffawed. “Have I just gone over a conversational cliff?”
“Pretty much,” he said.

Thea did an amazing job and created a fascinating world. One of the best series I’ve read.