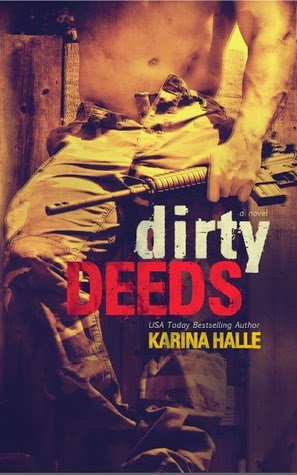 As a flight attendant, Alana Bernal has had her share of suitors. She's also had more than her fair share of tragedy within her messed-up family. But what she hasn't had is love. Real, rip-your-heart-out, tear-your-clothes-off, all-consuming love.

At least that was the case until she met an American tourist, Derek Conway, a ripped ex-soldier with steely eyes and a commanding presence.

What started as a chance encounter between the two in Puerto Vallarta, a weekend full of hot sex and mindless passion, has led to something more.

Because Derek isn't the type of man to fall in love. He's not a man who sticks around.

And he's definitely not in Mexico on vacation.

Derek is a mercenary, a killer-for-hire, a man who does the ugly jobs for the highest bidder.

Unfortunately for Alana and Derek, the highest bidder has the power to destroy whatever worlds they have created for themselves.

The highest bidder can destroy everything.


*This is a romantic suspense book, #2 in the Dirty Angels trilogy but can be read as a standalone novel*

Once we were in the back of the cab, she was sitting with her thigh flush against mine. I was somewhat dressed up – dark jeans, white and blue pinstriped dress shirt – and yet I could feel her heat through my clothing. That and her smell and the way her hair fell across her face, highlighting the coy glimpses of her eyes and smile, was driving me borderline insane. Though we made small chat throughout the ride, my mind was elsewhere, concentrating on keeping that well-earned control I had. I had to focus on the task at hand, which of course was her. But not in that way. I needed in deep, for her own safety and my own sanity.

It took a long time to finally get to the restaurant, located in the old town of Puerto Vallarta, despite the driver cutting everyone off along the way. You either drove aggressively around here or you didn’t drive at all.

“Thank you,” she said to me as I took her arm and helped her out of the cab. When she straightened up she looked at the place and made an impressed face. “Wow. You know, I’ve never been here before and I’ve lived in PV for a long time.”

“First time for everything then.”

I picked the place because it looked a bit different from the tourist traps in the downtown area. There wasn’t much to the outside except for a tall stone fence topped with strangling vines and flowers that bloomed like white and magenta cotton balls. But on the other side of the cast-iron gate was a different story.

I helped her over there, even though she was walking so much better now on her cast, and a waiter opened it up, giving us a hearty welcome to Coconut Joes. I gave him the reservation name and he led us through tables with ivory-lace tablecloths, past a clear blue pool with koi fish and a waterfall, under dramatic palm fronds, and all the way to a table in the back corner with a lit candle on it. The place wasn’t anything too outrageous or stuffy but it was just classy enough.

“Again, wow,” Alana said as I helped her into seat. I was starting to like being her nurse. She looked around, her cheeks glowing beautifully in the candlelight. “This is something.”

“Something good?” I asked as the server poured us bottled water.

“More than good,” she said. “The guys I dated never brought me places like this.”

Something pinched in my chest. “Oh? They take you to McDonalds?”

She gave me a look. “Most of the men I dated were pilots. They would take me somewhere really snobby and expensive to try and seem better than they were.” She took a polite sip of her water and straightened her napkin on her lap. Every day, her pain seemed to be easing, her movements becoming more fluid. “Then the next night they would take some other stupid flight attendant to the same place.”

As much as I felt an unjustified hit of jealousy, she was giving me some information, something I could work with.

“So I guess there’s a lot of drama in the workplace, huh?” I said casually, eying the waiter who was approaching us with menus in hand. In the background “Morena de Mi Corazon” started to play from the speakers. “Spurned lovers and revenge in the air,” I added.

She laughed. “No, not really. It was my fault. Rookie mistake to date a pilot…even though I did more than a few times.” She looked away, embarrassed. “Most guys I date are a mistake but no one seems to get hurt.”

So that probably ruled out the whole spurned lover angle. Not that I thought an ex-lover could or would attempt to have her taken out and for that amount of money. Love made people do crazy fucking things but that would have been a first in my books. Besides, if she did have an obsessed ex-boyfriend then I was sure I’d find out about him sooner or later.

The waiter came by and told us the specials. I ordered for the both of us – seared Ahi – because I’d never done that before, not even with Carmen, and made sure he kept the bottles of wine coming.

She was about three glasses of wine in, giggly and eating her fish with gusto when I started pressing her.

“So do you have any siblings?”

The smile seemed to vanish right off her face. There. I had something there. No matter what her answer was, I hit a nail.

“I have a twin sister and a brother,” she answered simply.

She relaxed her jaw a bit and took a bite of her rice. “My sister, Marguerite, she lives in New York. Goes to film school.”

Hmmm. That placed her out of range and a student at that.

“He lives around here.”

She shot me a wary look. “Around here. But he’s an asshole and I’d rather not talk about him.”

I raised my brow. “An asshole? What makes you say that?”

“I just do,” she said stubbornly. Then she sighed. “He just is. Every family has a…what do you say, black sheep. Right? Well, that’s him.”

I didn’t know her well enough to tell if she was lying or not. I’m not sure why she would lie about her own brother.

I pressed it further. “What does he do?”

“He’s in importing and exporting. Trade with America. That sort of thing.”

Well, we all knew what that meant down here. Running drugs, like everyone else. Still, that gave me something to go on. Of course the name Juan didn’t help me much.

“What’s his last name, his surnames?” I asked, knowing that sometimes the men in Mexico took on their mother’s maiden names as well as their father’s.

“Bardem,” she said without hesitation. “Why all the questions?”

I shrugged and leaned back in my seat. “Just want to know more about you.”

Her brows knitted together as she eyed me suspiciously. “Maybe so, but you’re asking with this look on your face, like you’re all David Caruso.”

“CSI Miami. It’s still my favorite, I don’t care for the other ones.”

“Well, I’m sorry to disappoint you but I don’t have the hair to be David Caruso, nor do I have the sunglasses and quippy one-liners.”

She took a sip of her wine but couldn’t hide her smile. Good, she was back to trusting me again. I wanted to ask her about her parents but I thought that would be pushing my luck. Whoever they were to her though, they were either dead or out of the picture. They had never come to see her in the hospital and the truth about her brother and sister explained why they hadn’t either.

What the hell have you done, Alana? I asked in my head as I stared at her across the table, the light illuminating her in an angelic way. Why would anyone pay me two hundred thousand dollars to have you killed?

And how the hell would I ever know the answers to those questions without incriminating myself? 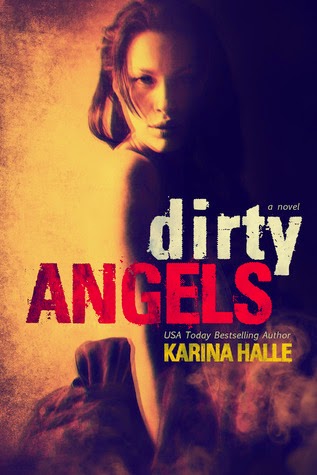 From the USA Today Bestselling author of Love, in English and The Artists Trilogy, comes a dark romance about a good girl and a very, very bad man. It’s a deliciously twisted take on forbidden love, set among the drug cartels of hot, steamy Mexico and is not for the faint of heart. It contains explicit sex, violence, abuse, drug use, bad language and sexy Mexicans. You have been warned…

For Luisa Chavez, a twenty-three year old former beauty queen, a better life has always been just out of her reach. Sure, she’s had men at her feet since she was a young teenager but she’s never had the one thing she’s craved – security. Having grown up in near poverty, her waitressing job in Cabo San Lucas can barely let her take care of herself, let alone her ailing parents. Every day is another unwanted advance, every day is a struggle to survive.

When Salvador Reyes, the depraved leader of a major Mexican cartel, takes an interest in her, Luisa is presented with an opportunity she can’t afford to pass up. She’ll become Salvador’s wife and exchange her freedom and body for a life of riches – riches she can bestow upon her deserving parents. But Luisa quickly finds out that even the finest wines and jewels can’t undo the ugliness in her marriage, nor the never-ending violence that threatens her every move.

Soon, Luisa is looking for an escape, a way out of the carefully controlled life she’s leading. She finally gets her wish in the worst way possible.

That man is Javier Bernal. And he wants Luisa. He wants to take her, keep her, ruin her.

Unless she ruins him first.

Some men were born to create empires, some women were meant to be queen.

**Dirty Angels is the first standalone novel in the Dirty Angels Trilogy, in which all books feature or involve different characters. The character of Javier Bernal is from The Artists Trilogy, and while reading TAT is recommended if you want additional insight into this twisted character, it is not required.**

With her USA Today Bestselling The Artists Trilogy published by Grand Central Publishing, numerous foreign publication deals, and self-publishing success with her Experiment in Terror series, Vancouver-born Karina Halle is a true example of the term "Hybrid Author." Though her books showcase her love of all things dark, sexy and edgy, she's a closet romantic at heart and strives to give her characters a HEA...whenever possible.Karina holds a screenwriting degree from Vancouver Film School and a Bachelor of Journalism from TRU. Her travel writing, music reviews/interviews and photography have appeared in publications such as Consequence of Sound, Mxdwn and GoNomad Travel Guides. She currently lives on an island on the coast of British Columbia where she’s preparing for the zombie apocalypse with her fiancé and rescue pup. 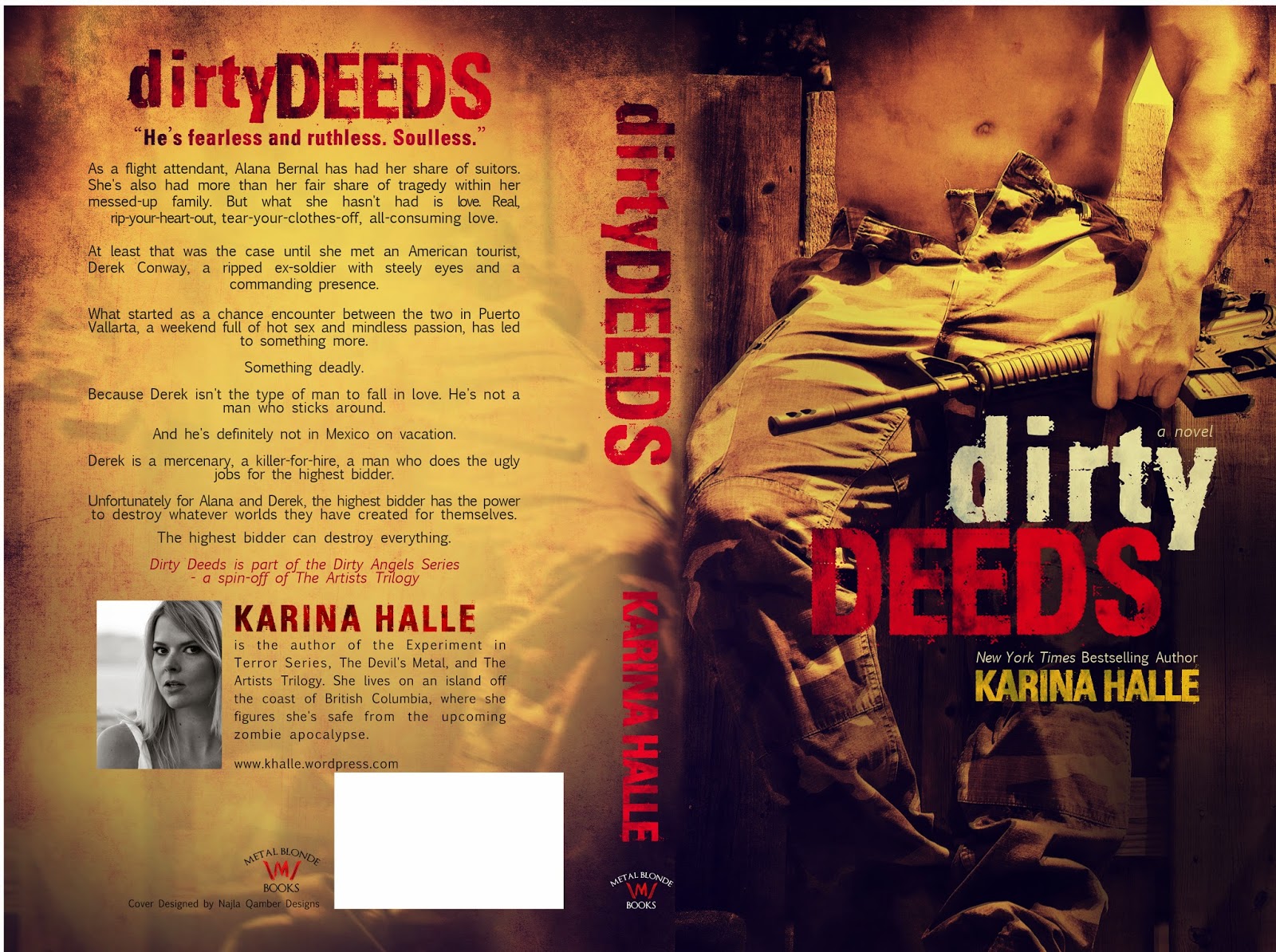