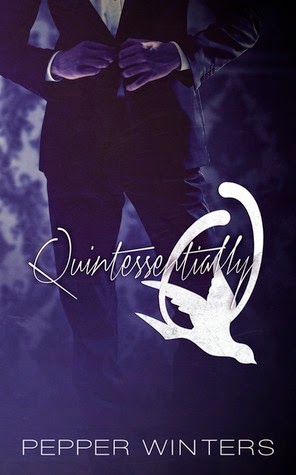 “All my life, I battled with the knowledge I was twisted… fucked up to want something so deliciously dark—wrong on so many levels. But then slave fifty-eight entered my world. Hissing, fighting, with a core of iron, she showed me an existence where two wrongs make a right."

Tess is Q’s completely. Q is Tess’s irrevocably. But now, they must learn the boundaries of their unconventional relationship, while Tess seeks vengeance on the men who sold her. Q made a blood-oath to deliver their corpses at Tess’s feet, and that’s just what he’ll do.

He may be a monster, but he’s Tess’s monster.

I never thought I’d enjoy this story even more than Tears of Tess.
In this book we get to learn more about Q.
Talk about messed up. Q could be the poster child for dark and deranged. His entire life has been filled with violence of some sort and now it revolves around human trafficking, especially women who are sold as sex slaves.
This is how he met Tess.
I don’t really know how to describe their relationship. It’s not your conventional love story.
Just like Tears of Tess, do NOT expect this to be a romantic fairytale. Far from it. Nothing changes much between them in the beginning.
Q is keeping her at arm’s length mostly because he’s afraid that one day he won’t stop and he’ll kill her. As I said, there’s nothing romantic about their love making. Both find pleasure in pain. More pain that is normal.
It was interesting to learn more about Q. About what drives him to buy those women and it is not the fact that he wants to have them as slaves.
Why you’ll have to read and find out for yourselves. He’s not a monster all the time.
Don’t get me wrong, he’s all kinds of messed up but there’s more to him than darkness.
Some of the scenes in this book are downright creepy. Quintessentially Q is even more disturbing than Tears of Tess.
Just when you think all is well, something happens than will change Tess and Q’s lives even more than they were expecting.
The violence described here is more disturbing than you can imagine. I’m not the kind of person that is easily impressed when it comes to things like that in a book but this was too much even for me.
Pepper shows us that the human character is capable of more cruel and horrible acts of violence than we can imagine.
Again, do NOT expect a romantic tale. Do NOT expect to see in Q a knight in shining armor. The guy IS a monster. The things he’s capable of will blow your mind and give you the chills.
This book also is recommended to an adult public. There’s too much violence in it for someone younger. I can’t wait to get my hands on Twisted Together. If it’s even half as good as these two I’m sure I’ll love it.