Synopsis:
These Royals will ruin you…

From wharf fights and school brawls to crumbling lives inside glittery mansions, one guy tries to save himself.

Reed Royal has it all—looks, status, money. The girls at his elite prep school line up to date him, the guys want to be him, but Reed never gave a damn about anyone but his family until Ella Harper walked into his life.

What started off as burning resentment and the need to make his father’s new ward suffer turned into something else entirely—keep Ella close. Keep Ella safe. But when one foolish mistake drives her out of Reed’s arms and brings chaos to the Royal household, Reed’s entire world begins to fall apart around him.

Ella doesn’t want him anymore. She says they’ll only destroy each other.

Secrets. Betrayal. Enemies. It’s like nothing Reed has ever dealt with before, and if he’s going to win back his princess, he’ll need to prove himself Royally worthy.

***ARC received for an honest review***

“These Royals will ruin you…”

I think I’ve already said that Paper Princess messed up with my head, but oh my God, Broken Prince is so much worse! Now I need long term therapy.

I’ll begin with the beginning: I loved Paper Princess, it was fun and intense, impossible not to love it. And I’ve spend the last few months counting the days until Broken Prince came out. I don’t really know what i was expecting? Paper Princess is hard to forget and Broken Prince is even harder.

“Keep the Royal name clean, boys. It’s easy to tear it down, so much harder to build it up.”

For those of you who have read Paper Princess you know that the ending is mind-blowing, for those of you who haven’t what are you waiting for? Broken Prince begins only a few minutes away from where Paper Princess ended. And what’s amazing is that the first chapters are form Reed point of view so if you want to know what was in his head while he destroyed the best part of his life now you have the opportunity. I love that the entire book is from both Reed and Ella’s POV. It’s funny to go between their minds. It’s amazing to finally find out how a Royal mind works.

“My instincts had screamed at me that she was trouble. My instincts were wrong. She wasn’t trouble. I was. Still am. Reed, the destroyer. It’d be a cool nickname if it wasn’t my life and hers that I’m taking down.”

If you expect an easy explanation or an easy forgiveness you are mistaken. Things are bad for the Royals. It seems that no matter how bad they had treated her and how they see her as the daughter of the devil, they need Ella in their life. Paper Princess left things very complicated and Broken Prince makes them even more so.

What I liked about this book is that some secrets are finally revealed and we discover what is wrong with the Royal brothers. If you think Reed is the one with problems, think again. I would have loved to have a book for each one of the brothers. It would have been a longer series. They are so complex and they deserve a happily ever after. On the other hand I’m glad that we have only one more book to go, only 370 pages to discover all the secrets (I hope so).

“Ella once asked me if I fought for money. I don’t. I fight because I enjoy it. I like the feel of my fist in someone’s face. I don’t even mind the pain that blooms when someone else lands a punch. It feels real. But I never needed it. Never really needed anything before she came along. Now I’m finding it hard to breathe without her next to me.”

I won’t say more about Broken Prince because it’s that type of book that deserves to be discover by each one of you. And because I can’t think straight when I think about this book, the ending left me again with my mouths wide open. This time around there are more problems and more shocks to recover from. Now I’ll begin counting the days until Twisted Palace.

“If I used you, then you’d have to abstain from other girls.”
“What do you mean?” he asks, looking genuinely confused. Fidelity is obviously a foreign concept to him. 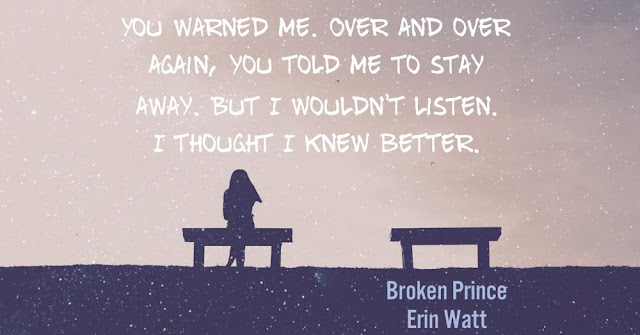 WOW.... I have been hearing lots of this series..... Totally on board with checking it out.