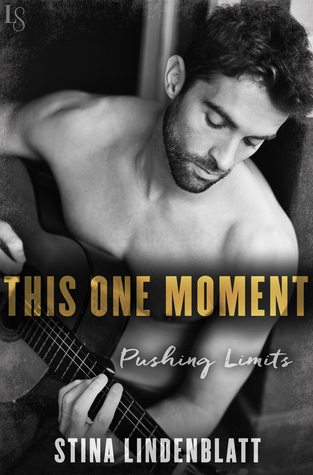 Fame, fortune, and stadiums full of screaming fans are right around the corner for the rock band at the heart of Stina Lindenblatt’s steamy, intense Pushing Limits series. But it’s an epic love affair that steals the show in this opening act.

When Nolan Kincaid skipped town to chase the music career of his dreams, he knew he wouldn’t miss the reminders of his broken family—he wasn’t so sure he could forget the girl he left behind. Now his band is touring nonstop, the recording sessions go all night, and the groupies are crazed. But when he hears that Hailey Wilkins is in trouble, he drops everything.

Hailey thought she’d missed her chance with Nolan. Five years ago, the moment she realized she loved him was the moment he decided to leave. Now, when a brutal assault lands her in the ICU, Nolan flies straight to her bedside, acting like nothing’s changed. What’s a rock star like him doing, canceling shows and risking his record deal, just to nurse an old friend back to health? And why should Hailey believe he’ll stay this time?

With her attacker still at large, Nolan’s ready to rise to the occasion. He knows he let Hailey down once before, but he’s ready to give her everything, heart and soul—and he’ll fight for the chance to prove it.

Nolan Kincaid has left his hometown in order to forget the past. But doing so he also left Hailey, his best friend and the only woman he has ever loved. Now he is a famous rock star. All the girls fall at his feet and he seems to have a bright future ahead of him. But when something very bad happens to Hailey he has to go back.

Hailey thought she was never going to see Nolan again. But now, after five years, he is there, right next to her. Being close to one another again means facing old feelings and be heartbroken all over again when the time will come to say goodbye.

When it came to the law of best friends, the unwritten rule stated that if you fell in love with her, you should never ever tell her the truth.

Nolan's memories are truly horrifying, and I can’t judge him for running away, but leaving Hailey behind with no way to contact him wasn't very nice. I liked Nolan for the most part, I even understood his decision to some extent. I could feel him, real, he isn’t some sort of unrealistic rock star. He has a story, a bad one but all artists have a damaged soul. He is a coward though, he doesn’t have the courage to tell Hailey that he loves her. He leaves her behind, making decisions for her. What he thinks is best for her is most important that what she wants. Men are sometimes like this. I liked that the entire rock star thing didn't go his head. He isn’t a jerk.

Hailey is nice, she truly is the best friend ever. She lets Nolan back into her life too easily in my opinion. But he had his reasons and she understands that, even if he hurt her. What I didn’t understand at all was what kind of relationship they want to have with all that kissing and stuff. They are friends, they cannot just kiss one moment and don't talk about it the next. And all his fans, it’s kind of crazy what happens in the music industry. The paparazzi, the fact that you can’t have a private life.

Hailey’s song. I’d written it for her before I left Northbridge, not that she knew my love for her had inspired the lyrics. “This One Moment” was our biggest hit.

Outside is raining and I have just spent a few hours in the company of a good book. It was a nice day in the end. And This one moment is exactly that type of book, the one that can help you forget about the outside world and enter for some time in the world behind every rock star. It isn’t that much about the stage, it's more about the fact that our favorite stars have a story and sometimes isn’t as beautiful as we believe.

Sign up for Stina's newsletter for updates on book news, info on new releases, exclusive cover reveals and sneak peaks, and a few surprises -- http://bit.ly/YU5rnn

Stina Lindenblatt lives in Western Canada, where she loves to dream up New Adult and Young Adult stories, especially those with romance. She loves to travel, and has lived in England, the US, Canada, and Finland. She has a Master’s of Science degree in exercise physiology and has worked with elite athletes. In her free time, Stina enjoys photography, especially the close-up variety.

Ohh Great review now I really want too check out this book. This is the second time I heard a great review about it. And I am very intrigued to know what was Nolan tragic bad past for him to leave Hailey behind! Thank you for the awesome post.