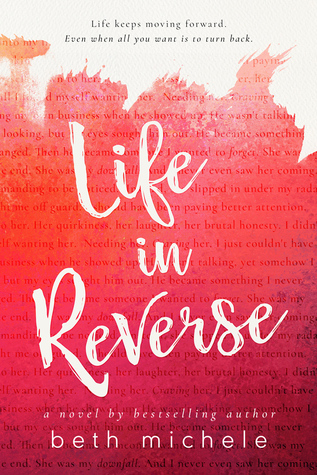 Vance...
Ember Bennett was my beginning...but she was also the end. She was my downfall. And I never even saw her coming. She didn’t burst into my life demanding to be noticed. Instead, she slipped in under my radar when I wasn’t looking. Caught me off guard. I should have been paying better attention. Because I found myself drawn to her. Her quirkiness, her laughter, her brutal honesty. I didn’t ask for her. Still I found myself wanting her. Needing her. Craving her. I just couldn’t have her.
Ember...
I was minding my own business when Vance Davenport showed up. He wasn’t talking, yet somehow I heard him. I wasn’t looking, but my eyes sought him out. He became something I never expected. Until it all changed. Then he became someone I wanted to forget.

It’s hard to say what I feel right now, five minutes after I’ve finished Life in Reverse. It feels somehow as an emotional journey, only that for me the hard stuff was at the beginning. The story is spilt in two different parts, for those who have read the book you know what i mean, for the rest I’ll let you find out by yourself.

After tragedy struck, Ember has good days and bad days. There are moments when she thinks she can’t live any more and moments when she is fine. But she has her twin sister to make her smile and two parents who love her. And she has sculpting, which is her shelter, the place she goes to when the outside world is too much and she wants to forget everything. And the funniest part of her is her obsession with Mickey Mouse. Proudly wearing a Mickey Mouse t-shirt at twenty two is something.

Vance’s life is filled with anger, fury for things he cannot change and a father who decides to go on with his life. Julian, his big brother is easier going and tries to make Vance give living a chance and stop existing in a bubble of sadness.

Ember brings so much in Vance’s life in such a short period of time. And he can’t help but laugh with her and care for her and eventually fall in love with her. But their love has an expiration date...

It may sound strange, but I liked the first part the most. The way they fall and the entire journey until it happened. The split...

Their innocence goes away in a heartbeat, too fast, in my opinion, and a little bit forced. It wasn’t original, I know that books rarely are, but usually, when you read a story, you see it all fitting, even if the plot was used thousands of times before. And I think that what comes after that is a bit too much. I like when the heroes know what they want, even if I know that reality isn't always like this. Still, I found the approach kind of unrealistic for the situation presented in the book.

It’s hard for me to rate this book, because I had tears in my eyes a few times, but there were parts when I felt like I was moving with too much speed and I was afraid that I'd miss something. The first part was the one that made me feel so much and it deserve five stars, the second part was good, but not mind-blowing, so I’m going to give it three stars.

"Something inside me that was already broken managed to shatter even more. I wondered how God could be so fucking cruel—giving us beautiful memories only to take them away. After all, what are we without them?"

"I just think there’s already too much filter in the world as it is, and it leads to too many misunderstandings. If people wouldn’t mask their feelings all the time, the world would be a better place. There’s something to be said for simple honesty."

“I mean, without our memories, what are we? We have nothing. We are nothing. We’re…,” his Adam’s apple bobs in his neck, “alone.”

“I have no problem with my own company. I’m kind of decent sometimes.”

Beth Michele is the author of Love Love, Lovely, Scarred Beautiful, Finding Autumn, Rex and For the Love of Raindrops. She is a Connecticut native who loves spending time with her husband and two children. If you can’t find her, though, she’s probably hiding out with her kindle somewhere quiet, preferably a spot overlooking the ocean. She has an affinity for Twizzlers, is a hopeless romantic, and a happily ever after fanatic.
Sign up for my NEWSLETTER for all the latest updates! Newsletter
Visit my Website.
Follow me on Twitter | Facebook | Goodreads | Amazon