Release Day Blitz for Shades of Treason by Sandy Williams 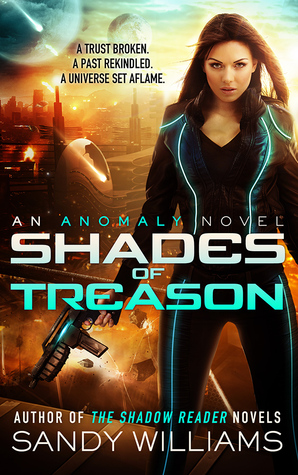 Shades of Treason
(An Anomaly Novel, #1)
By Sandy Williams

Blurb:
Ash would have given her life to save her teammates.

Instead, they gave their lives to save hers.

Lieutenant Ramie Ashdyn is an anomaly, a person whose genetic makeup makes her stronger and smarter than the average human. She’s pledged her life to protect the Coalition, an alliance of thirteen planetary systems, but when a top secret operation turns bloody, she’s charged with treason and the brutal executions of her teammates.

The Coalition needs the information Ash’s team stole on their last mission, so they send in Commander Rhys “Rest in Peace” Rykus to get it. He’s the man who’s responsible for turning Ash into an elite soldier... and he’s a man who isn’t, never was, and never will be in love with the woman he trained. Or so he tells himself.

Ash wants nothing more than to clear her name and be the woman her former instructor wants her to be, but the enemy who killed her teammates did more than frame her for treason and murder: they telepathically silenced her mind, preventing her from saying anything that might point to the truth about what happened.

Now Ash is trapped and set to be executed, the truth dying with her. Unless she can prove her innocence. But taking that path could destroy the Coalition she’s sworn to preserve and protect...

Available for purchase at :

Rykus’s boots stopped inches from her face. He stood there looming like a behemoth-class warship bearing down on a two-seater small-craft. He’d always had a talent for making his anomalies feel insignificant. Ash half expected him to shove her head into the dirt again. Instead, his gaze and the weight of his last command pressed her down as effectively as a sub-atmo fighter in a steep climb.

“Why didn’t you escape when you had the chance?” His hands closed around her wrists, maneuvering them together over her head.

He looped and twisted the cord around her swollen and bruised skin, probably in a Caruthian lock-knot, which would be damn hard to break out of. The more she pulled against it, the tighter it would become.

He yanked her into a sitting position. The forest spun. She stared at Rykus’s chest until the world settled.

Her gaze rose from his chest to his eyes, and she cut off her laugh. His expression was as dark and cold as space, but there was a hint of heat in his gaze, of galaxies that couldn’t be seen with the naked eye. Rykus had a gravitational pull as strong as any sun, and she couldn’t resist being pulled in by his flames.

“I should have escaped,” she said. “I made a mistake.” A huge mistake.

“Wrong answer.” He jerked her to her feet.

“That is the truth.”

Rykus still had himself under control but she didn’t. She was tired, frustrated, and pissed off at herself, at Rykus, at the whole Coalition. She’d bled for them all. She’d given up her free will to become a Caruth-trained anomaly, all so she could protect it. And they believed she was working against it now. Working with the Sariceans.

“Why did you stay?” Rykus demanded again.

She pulled her arm free from his grasp. “I fucking stayed because of you. Sir. Because of the goddamn loyalty training.”

“Tell me how many people I killed,” she demanded. “Tell me!”

He opened his mouth to fling a number in her face, but caught himself. The skin around his eyes tightened then relaxed. In a voice much quieter than she’d just used, he said, “Brookins. My XO. You shot him on your way off the Obsidian.”

It took her a moment to figure out who he was talking about. She’d shot a total of four people during her escape. Only one of them was likely a fatal wound—the anomaly who’d very nearly prevented her escape.

“Well,” Ash said, feeling some of her independence, some of her brazenness return. “If your XO is dead, he wasn’t a very good anomaly.”

Her fail-safe stared, unmoving, as the wind picked up, carrying the scent of smoke and burning vegetation through the air. Her mental clock clicked to five, six seconds before the rage melted from Rykus’s shoulders. Slowly, he shook his head.

Ash let a smile spread across her face. “That implies you’re sometimes happy you met me.”

Sandy Williams has lived and breathed books all her life. When she was a teen, she was always the first to finish her class assignments so that she could read as much as possible before the bell rang. Her grades didn't suffer (much), and she was able to enroll in Texas A&M University. She didn't sneak in novels there, but her college lecture notes are filled with snippets of stories. After she graduated, she decided to turn those snippets into novels.

Sandy writes books with high-octane action adventure infused with a strong romantic element. She is best known for The Shadow Reader novels, an urban fantasy romance series about a human who can both see and track the fae. When she’s not reading or corralling her twin boys, she enjoys playing EuroGames like Dominion, 7 Wonders, and Agricola.

You can find Sandy at