Book Blitz: Excerpt and Giveaway for Spectacle by S.J. Pierce 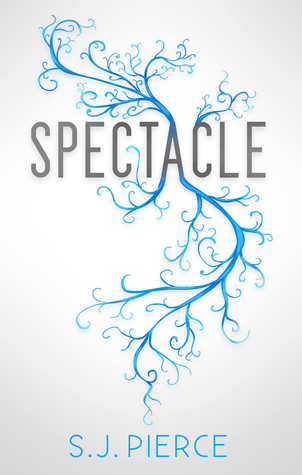 ***This is currently a web series!!! The author is releasing a chapter at a time on her website at www.sjpiercebooks.blogspot.com. You can read there or go to Scribd, download their app, and read there.***

Fear can make you a target…

Two hundred years after the Great Disaster, the day earthquakes ravaged Earth’s landscapes, humanity has finally regrouped and is working toward a better future. But in New America – one of three small, remaining landmasses – the threat of overpopulation makes a better future seem bleaker by the year.

Mira (Mirabella) Foster and her parents are citizens of New America, and with the threat of starvation and disease looming on the horizon, a new discovery threatens to push everyone to the brink of chaos: blue markings develop on people’s skin. Markings that are distinctive of a humanoid alien race named Changers that secretly sought refuge on Earth years ago. Markings that allow them to camouflage their skin, but also make them feared, and eventually, targets of violence.

Mira’s dad is one of them.

Anger can make you a spectacle…

Banished to a treacherous, uninhabited island, a newly orphaned Mira and her kind struggle to survive and settle into a new way of life. Her main priority becomes seeing to Jackson’s care, her friend with Muscular Dystrophy, and tending to her garden as a way of distracting herself from the pain of losing everything she loved. But just as she’s adapting to this new life, their Elders approach her with a plan to insert themselves back into New America to uncover a conspiracy. A conspiracy, they believe, that includes the presidency and landed them on the island, costing many Changers their lives, including her parents’.

In a world where staying on the island means a possible untimely death, as does risking her life to uncover a horrible secret that might one day set them all free, which one will she choose? And if she chooses to help, can she tame her anger over their mistreatment long enough to make sure their plan goes off without a hitch? Because, after all, the last thing her kind needs is to make spectacles of themselves, and as she knows all too well, both anger and fear have a perilous knack for destruction.

I must have passed out because I awake with a start, cradled in a strong man’s arms. Not my dad. This man smells like pine trees and lemons, his touch cold and unfeeling as he carries me down a hallway. “Mom,” I croak out, my voice far-off. My ears buzz like mosquitos are living inside them.

The man says nothing.

I look for her but don’t see her. I try and squirm free, but he holds me tighter. “Mom!” I cry.

“Shhh,” he says, more scolding than soothing, “You’ll see her soon.” I obey because he scares me. And because he wears a uniform like the others.

I notice we’re not in the same building as before. The stark white walls, florescent lights and bleach smell tells me we’re in a hospital. A nurse scurries by with a man on a stretcher, and my anxiety swells. I want to wiggle again, but I don’t. A whimper escapes. Where are my parents? I want my parents….

The man takes me into a room where a doctor awaits. She sits on a stool beside a bed just big enough for someone my size. Her eyes roam over me concernedly.

Why would I be hurt?

Gunfire, I remember, and my whimpering turns into a full blown sob.

“She bleeding anywhere?” the doctor asks over my wailing.

He shakes his head, and with more care than I thought he was capable of, he places me on the bed beside her.

She waits for my cries to ebb and looks as though she wants to cradle me, but she doesn’t.

“Where’s… my mom…” I say between broken breaths.

Like the man, she doesn’t give me an answer, though I can tell she’s dying to so it’ll comfort me. “Lie back,” she soothes. Her red hair shines and is cut at an angle against her neck. Freckles splay across her nose, and there’s kindness in her eyes.

I lie back as instructed and work on getting myself together. While her cold hands poke and prod, I stare at the ceiling, tears dripping onto the paper covering the bed. It crinkles as I relax under her touch.

I think of Jacks and Luxxe and their moms. Are they here too? Maybe when the doctor is done she’ll let me see them.

Susan James Pierce has a degree in Marketing Management, works for a Fortune 500 company in Atlanta, Georgia, and devotes her precious, spare time to writing Fantasy, Paranormal and Sci-fi novels.

What an amazing cover!

Thank you for the awesome giveaway!

I never read web series.I think I'll give it a chance.