Our perceptions create our reality, even when they're wrong. Nobody understands this better than Gavin. Nobody.

To most, he is a shadowy agent of chaos. His motives are questionable, his methods bizarre. But his journey is one of both protection and redemption, and his story is yet untold. Until now. The past and present you think you know are about to change.

And you’ll never see Ruby, Gavin, or their relationship the same way again. 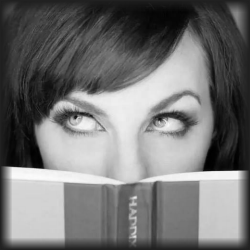 Amber Lynn Natusch is the author of the bestselling Caged, as well as the Light and Shadow series with Shannon Morton. She was born and raised in Winnipeg, and speaks sarcasm fluently because of her Canadian roots. She loves to dance and sing in her kitchen—much to the detriment of those near her—but spends most of her time running a practice with her husband, raising two small children, and attempting to write when she can lock herself in the bathroom for ten minutes of peace and quiet. She has many hidden talents, most of which should not be mentioned but include putting her foot in her mouth, acting inappropriately when nervous, swearing like a sailor when provoked, and not listening when she should. She’s obsessed with home renovation shows, should never be caffeinated, and loves snow. Amber has a deep seeded fear of clowns and deep water…especially clowns swimming in deep water. To learn more about Amber and her books, visit www.amberlynnnatusch.com.