Synopsis:
Love in the no-fly zone…

Distraught over the loss of her brother in a fighter jet accident, Tinklee Pinkerton decides to follow in his footsteps and prove the tragedy wasn’t his fault. But when she’s chosen as the first woman to fly the Air Force’s F-35, her plan for a life that revolves around work is thrown off course by a handsome, mysterious stranger…

Thanks to Locke’s seductive British accent, sweet nature, and one too many beers, Tink is soon inspired to throw caution to the wind and herself into his arms. She thinks maybe love can heal after all—until she discovers Locke is her superior officer. Tink has no problem risking her life in the air, but with everything on the line, is she brave enough to risk her heart on the ground?

There was zero chance of survival—for either of us.

The thought caused my insides to twist as I stood, paralyzed staring at the blazing inferno. I watched in shocked horror from the window of the control tower as the jet-fueled flames fed on his body, still strapped inside of the cockpit.

Tonight the distant flames were from a bonfire that danced happily in celebration of a holiday, but their flames were close enough to ignite the memories. Memories that still fueled my nightmares. A familiar chill skated down my spine.

I slammed down the beer bottle on the table next to me and looked away from the flames. Sweet honey lager splashed out and onto the cover of my tablet that sat on the edge of the table.

The tablet called to me. I couldn’t help but reach for it. My shaking hand nearly knocked over the beer bottles that surrounded it. My index finger hovered over the screen. The damn arrow glowed as if challenging me to touch it.

Go ahead Tink, watch me one more time.

I swallowed the boulder-sized lump in the back of my throat as I accepted the dare. My finger tapped the start button and instantly dropped me in the middle of the nightmare that had consumed and wrecked my life.

“Altitude. Altitude. Pull up. Pull up.” The unemotional, mechanical female voice of the jet’s warning system rang out.

Her words rattled in my head like a pinball looking for its escape. I studied the altimeter screaming toward two thousand feet.

“Pull up,” her empty voice commanded. Each time she repeated those words, my stomach lurched. That voice, that command, still haunted me.

I squeezed my eyes closed unable to stop from reliving that day in the tower and how her robotic tone had sent everyone into a panic. I stood frozen, unable to do a damn thing as the jet continued its nosedive.

My own weight crushed me as if I were being pushed down by the forces of a hard turn in the cockpit. I gasped for oxygen, my lungs rebelling as the image of the jet pitched down. I began counting between breaths to keep from passing out the way they had taught us in pilot training.

The sound of calm breaths from video filled the air. The ground rushed closer as the jet blitzed toward fifteen hundred feet.

I leaned forward and my lips parted as if I were going to retch, but nothing spilled out. I forced each breath to prevent me from blacking out like Colin. His calm, sleeplike breaths seeped from the tablet’s speakers, haunting me in its wavelike rhythm. I held the tablet tight in my hands. The breaths were the last sound that I’d ever hear from him.

A giant green arrow flashed across the video. It acted as a forewarning of the jet’s impending impact. My entire body shuddered as adrenaline thrust through my veins.

I wanted to choke the aloofness from her tone. To the jet’s warning system it was just another jet. To me, it was my world coming to an end. She may as well have tacked the word ‘idiot’ onto her feeble attempt of a warning.

The military Humvees scrambled on the screen like cockroaches escaping the light. I was paralyzed. I couldn’t do anything to prevent it from happening then. Why did I still hope I could stop it now?

I closed my eyes.

It was too late.

I opened my eyes. The ground rush on the display was exactly how they described it in pilot training; the world blossomed as earth ripped through to meet you in the cockpit.

Her vacant voice instructing him to pull up was the last thing to ring out right before my life shattered. Everything exploded into a bright blinding haze on the screen with a blaring detonation. The blood cooled in my veins.

I flipped the tablet cover and traced my still trembling finger along the lines of the worn material. I had stolen the video from my father’s files the night after the funeral. I had watched it a thousand times, each time reliving the horrors of that day.

But tonight, once was enough.

Tonight, I had to figure out how the hell I was going to climb into the cockpit and fly the jet that killed my brother. 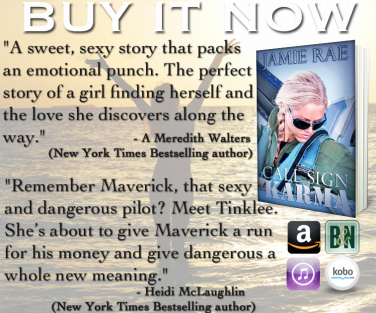 JAMIE RAE is a New Adult and Young Adult author. She writes with one goal in mind--create stories with a positive message that will stay with the reader long after they've finished reading.

Jamie is an avid reader and loves discovering stories with a great hook, though she will not eat, sleep, or speak until she reaches the end. The Harry Potter years weren't pretty!! Convinced that her Hogwarts letter was lost in the mail, she keeps a watchful eye for owls hoping her children will have better luck!

In her other life, Jamie Rae is an orthodontist, and literary agent. She keeps her heart overflowing with love as a mother of three and has perfected the art of nomadic living as a military spouse and Air Force veteran. Jamie has a passion for critters of all shapes and sizes and you can often find her sneaking them into her own home or volunteering for rescues.

Thank you so much for sharing and for participating in my blog tour! It means the world to me! *hugs*

I must say I am intrigued. And not by those boxers lol.

It is so great to have a novel about a woman pilot for a change!