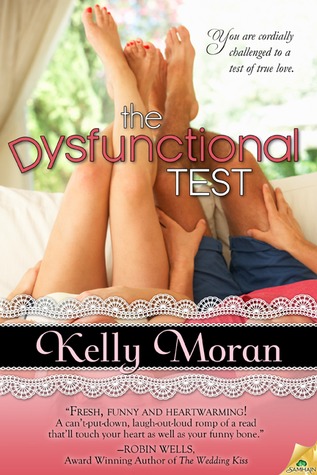 "You are cordially challenged to a test of true love. "

Growing up in her large, crazy Serbian family, Camryn Covic became an expert at shutting down her emotions in order to maintain her sanity. But when she loses her apartment, her job and her boyfriend all in one day, she hits her breaking point.

Worse, if her family finds out she's single "again," her sister's upcoming wedding will be a disaster. The bride-to-be has a plan, though. A plan that involves an old friend, a pretend relationship...and the probability of ending up in a padded cell. This time for real.

Troy Lanske agreed to the crazy plan only because, when he was a lonely foster child, Camryn was his lifeline. But she isn't the idealistic girl he remembers. She's become so jaded that she doesn't even believe in love anymore.

He sets out to restore her faith in happily-ever-afters, but his plan backfires when the fake relationship begins to feel all too real. Falling for the one woman he can't have could mean losing more than just his honorary family. He could lose everything.

Warning: Contains a Playgirl-material hero and a woman who thinks she couldn't be any more wrong for him. Enter one "Big Fat Overly Romantic Serbian Family." Sit back and watch the magic happen. Enjoy!


If you’re looking for a sweet, romantic and funny story this is the book for you.

The Dysfunctional Test it’s a story about self discovery and about learning how to trust and open your heart to someone else.

Camryn comes from a big, loud and, most of the times, annoying family. She’s never felt comfortable around them and now, when she has lost not only her job but her boyfriend too, she needs to find someone to take to her sister’s wedding as her boyfriend and get her parents off her back.

Here’s where Troy, Camryn’s friend since childhood, comes into the picture.

He’s a nice guy all around but, when it comes to ladies, he’s as far from monogamous as possible. And he’s the perfect choice to help Camryn with her problem by playing the pretended boyfriend.

Kelly did a great job in writing this novel. It’s filled with humor, refreshing, fast paced and emotional. You’ll be unable to put it down.

The characters are well developed and have strong personalities. I loved even the most annoying ones.

What I loved most about this book is the fact that everyone plays an important role in the development of the story. There’s no useless drama or characters that have no place there whatsoever.

And if Camryn’s family seemed a little bit “too much” and you think that Kelly might have stretched it a little bit, let me enlighten you – she didn’t. I’m not Serbian but in Romania, in my family at least, I have seen the same things happen.

There are always the annoying aunts who like to point out all your flaws, the uncles who like to party too much and be loud as eff, the grandmothers who make you feel like crap because by the age of 22 or 23 you’re still not married and “waste time” on useless jobs when you should be catering to your husband’s every whim and let him take care of the family like every man is supposed to.

Oh, and let’s not forget that freakin’ cousin from hell who, apparently, can do no wrong and everyone compares you to.

Yep. There’s always the possibility you’ll end up in therapy after an extended family reunion.

I honestly wish they’d make a movie based on this book.

Kelly Moran is a romance author of enchanting ever afters. She is the winner of the 2013 Catherine Award and a 2014 Award of Excellence Finalist through RWA, plus she earned one of the 10 Best Reads of 2013 by USA TODAY's HEA. She is a proud Romance Writers of America member.
Kelly's been known to say that she gets her ideas from everyone and everything around her and there's always a book playing out in her head. No one who knows her bats an eyelash when she talks to herself. Her interests include: sappy movies, MLB, NFL, driving others insane, and sleeping when she can. She is a closet caffeine junkie and chocoholic, but don't tell anyone. She resides in Wisconsin with her husband, three sons, and her black lab. Most of her family lives in the Carolinas, so she spends a lot of time there as well.

I'm so glad you enjoyed it! Thank you!