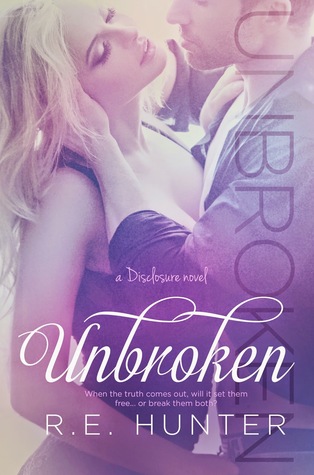 She was running toward her future. He was running from his past. When their worlds collided, nothing could prepare them for what was to come.

Reeling from Luke’s betrayal, Embry Jacobs is lost and looking for answers. His lies have ripped them apart, forcing her to question everything she thought she knew about the man she loves. But to give Luke another chance, she’ll have to forgive his lies and risk her already fragile heart.

Luke Brody’s past has finally caught up to him — in more ways than one. After losing the only woman he’s ever loved, he’ll do anything to get her back. But when he finally has the chance to make things right, unforeseen circumstances threaten to tear them apart once more.

When the truth comes out, will it set them free or break them both?

In Unbroken we see Embry and Luke try to put back together the broken pieces of their relationship after he finally drove them apart.

The characters are the same as before so, there are no major changes on that front.

I found the story lacking in some aspects and really good in others.

What I really liked was how Luke and Bree went about fixing their relationship. They actually took time to figure out what went wrong instead of giving into the attraction and behaving like nothing happened so, Kudos for that.


And Luke is so damn cute. Those Valentine’s Day rhymes, so hilarious.

One would be them apologizing to each other all the time. I get it. They talked, they said how sorry they are, end of the story. Having them apologize for every small thing … I find it repetitive.


And you know what else bothers me? Skipping through large periods of time without giving us a clue about what went on during that time.


Dear authors out there who do the same thing in their novels. DON’T! Seriously.

It’s frustrating and it makes me, personally, want to give up on that particular book. I get it that it would be boring to get a day by day play but going from the present day to three, five or eight months later, and this repeatedly, without giving us at least a little amount of information on what happened it really is unappealing.

One more thing and I’m done. When you put a particular twist into the plot and make it sound important, try not to just brush it off later on like it didn’t really mattered. Either avoid it altogether or don’t put such an emphasis on it.

Case in point, Embry’s ex and her story with him.


While it was an important part of book one, here, it was dealt with in three or less pages.


In spite all this, the book wasn’t a total waste. The characters are interesting and funny and it’s nice to see a new aspect of Bree and Luke’s relationship. To see them evolve and grow stronger together.


You should definitely give it a try.

Rose Hunter is a native New Yorker currently living in Austin, Texas with her husband and their crazy kitten. Surviving solely on Starbucks Iced Chai and KIND bars, she spends her days writing angsty romance and chasing happily ever afters. When she’s not writing, you can find her on the beach with a glass of wine and a book in her hand.