Review! Everly After by Rebecca Paula 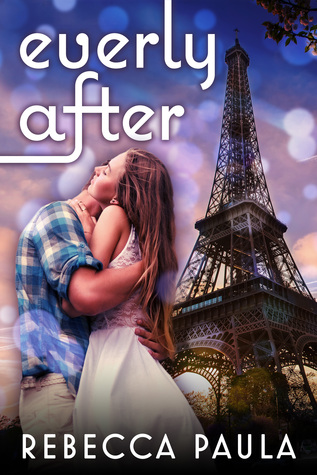 All truths burn bright and clear. I’m still waiting in the dark.

Everly Monteith has traded her life of glitter, parties, and self-destruction for waitressing at a Parisian café. She’s put the tragedy that sent her across the Atlantic in the past—until her toxic ex shows up and sends her reeling once more. Her fresh start begins slipping away until a smug British war correspondent crashes her party. But falling for Beckett means letting down her guard, something that might pull them both into the dark.

There are beautiful lies in this world, and it takes me being chased through a hallway at a rave to decide this girl is one of them. But even the most beautiful lies aren’t worth chasing.

Twenty-five-year-old Beckett Reid is forced into sabbatical after being kidnapped on assignment in Afghanistan. Back in Paris, he locks himself away to work on a novel, focused on saving his budding journalism career. But when he meets an enigmatic American heiress, his plans are quickly neglected. Everly is the perfect replacement for dangerous war zones, even if she does leave glitter on everything he owns. Reckless and wild, she runs through life making more mistakes than anyone he’s met, but Beckett is determined to fight for her, even if he must face the messy truth that he must fight for himself first.

This is one of those books that messes with your head and shows you how twisted human psyche is.

What we have in this novel is a disaster waiting to happen. Two unbalanced individuals – one on the path of self destruction and the other seeking peace- coming together in what might be the relationship that finally destroys both of them.

To be honest, I don’t really know why I picked this book for review. I think it was the fact that the synopsis hints at a mad who’s been in the army and now deals with PTSD. I’ve read several novels on this theme and enjoyed them so I guess I thought I’ll give this one a try.  I sure know I wasn’t expecting what I’ve read here.

There aren’t many characters . Just the main ones and a small number of what I call “background characters” and it’s actually easy to keep up with the story.

Everly can be described as the “poor” rich misunderstood girl. She’s had it all but always made the wrong choices which brought her where she is now – on a one way road to an early grave.

She’s immature, spoiled, irresponsible and, as much as she claims the contrary, she doesn’t care at all about anyone else. Case in point, her sick attachment to Beckett.

Beckett is a war journalist who has seen way to much death and almost got killed after being kidnapped and tortured on his last assignment.

He’s now in Paris with his best friend, a soldier on leave, and he’s trying to piece his life together, which is not easy since he can’t stand being around too many people.

At a party where his best friend has dragged him, he has the misfortune to meet our girl, Everly.
Like I said before, she’s even more messed up than him but at least HE has a valid reason.

Now this is going to be a little bit of a rant:
I’ve seen this pattern over and over again in so many novels.
The rich child who’s trying to break away from the mold his parents and society have created for him/her and goes on drinking and generally partying all the time, while complaining that he/she is misunderstood.

If you want to be your own person and show everyone that you’re more than some rich family’s spoiled offspring, that’s the wrong way to do it.

You need to get your things together and start actually doing something with yourself. Something other than partying, that is.

Instead of drinking away your cushy trust fund why don’t you do something else. Like, Get A Bloody Job and start giving back to society.

It’s the same with Everly.

She’s pretty smart and has a degree but all she does is to give in over and over again to her equally rich and careless ex/current boyfriend/sex buddy/whatever-the-hell-he-is like an irresponsible, brainless twit.

And she always justifies her actions by saying he was her first love and, even after every shitty thing he’s done to her and still does, she can’t resist him.
That is nonsense.

Where there’s will, there’s ALWAYS a way.

Thing is, she doesn’t want to change. It’s easier when you have no other worries except finding the next club to party at. This way of thinking and this kind of behavior has no excuse.

Like I said before, if you want others to appreciate you for who you are and do something with your life, that is so NOT the way to achieve your goal.

What Everly and Beckett have together is sick, self destructive and dangerous for both of them because, while Beckett seems to be perfectly aware of the wrongness of what she’s doing, he’s messed up just enough to come back for more. Not sure why it happens in the beginning, if it’s some misplaced desire to set her straight or just infatuation.

I don’t know what was the message the author wanted to spread with this book because I sure as hell didn’t get it.

It was a struggle to finish it and I’m sure I won’t be picking up the next volume.

1,5 * because I really liked Beckett. Well, most of the time.