Review & Giveaway All About You by Joanna Mazurkiewicz 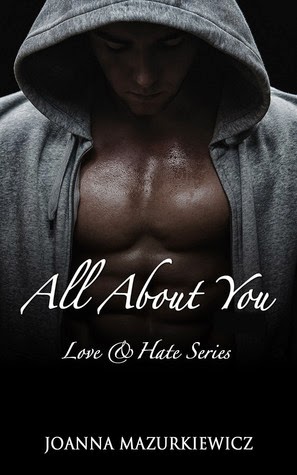 I start hating Oliver just after his older brother Christian’s death. I drag him down a road of humiliation and pain to try to cope with what his brother did to me.

A few months after Christian’s passing, Oliver leaves town, and for the next two years, he is absent from my life. The demons claw their way back in, and I must learn to live with the secret that has destroyed me.

Now I’m starting a new life, away from Gargle and away from my past, but everything crashes when I see Oliver the first day at university. It’s clear that many things have changed since we’ve been apart. Now he is captain of the rugby team and the most popular bloke on campus.

Then he makes a bet and gives me an ultimatum: I leave Braxton forever and start somewhere else, or I stay and play his game… because he’s never forgotten that it was me who ruined his life two years ago.


All About You it’s a story about love, hate and revenge.

When Christian, India’s boyfriend dies in a car accident, she turns into this horrible person and makes it her mission in life to ruin her dead boyfriend’s brother, Oliver, life. She bullies him all through high school, enjoying the thrill and the release his pain is giving her.

She has a reason, though. She wants revenge for what happened to her and because he hadn’t been there when he said he would.

Oliver doesn’t understand why India is being so cruel and, instead of retaliating he takes it all until high school is over and he can go away.

When they meet again Oliver is not that shy, closed off guy anymore. He hasn’t forgiven nor has he forgotten. Now is her turn to suffer at his hand.

This book is an emotional rollercoaster. At one point you don’t know whom to pity and whom to hate anymore. You’ll just go from anger to pity, to hatred, to compassion and back to anger again with every turn of the page. Just when you think everything will be alright, something happens and it’s back to square one. There’s no time to get bored. I know I didn’t. At one point I wished could read faster just to see what happens next.

I also liked how the author blended the past with the present a little piece at a time, taking care not to give too much away and spoil the book or and not too little and make it impossible for the reader to understand.

The characters are great and you’ll like every single one of them. You might expect them to be the damaged and always complaining kind but instead, they’re strong in spite of the damage inflicted on them by their pasts.

All in all, Joanna did a great job and I can’t wait to read the next volume, All About Me, since this one ended with a bloody cliffhanger. Yes, there’s a cliffhanger BUT, you only have to wait until September 30th to find out how it ends so it’s not THAT bad.

I’m glad I gave this book a chance.

We cross the path walking towards the entrance. I switch my bag, as my arm starts to ache, and drag my main suitcase behind me. We both notice the group of students throwing the rugby ball to each other outside on the grass. Dora is already playing with her hair, pretending that she is struggling with her luggage, probably hoping that any of those blokes would give her a hand. I roll my eyes, ignoring her moans, and move ahead. For a brief moment I feel someone’s eyes on me, so I stop and turn around.

One of the guys who was throwing the ball is staring directly at me. His eyes squeeze shut and a fire spreads over my spine. He seems familiar, but I shake my head, knowing that I don’t know anyone in Braxton and the sudden blaze of heat is just in my imagination. Dora manages to get the attention of one of the guys and they start chatting away. This is just so typical of her.

“Pass the ball, Jacob,” someone shouts behind me. But I ignore that voice, which sounds so familiar, heating up the blood that runs through my body. I think about back home. Mum asked me to call her when we reach Braxton just to make sure that we arrived safely.

Then something hits me hard in the back of the head and I let go a loud “Owww!” and turn swiftly around. I spot the rugby ball on the grass and reach out to massage my head. I narrow my eyes, spotting the same guy who was staring at me a few second ago. He is smirking.

“What’s your problem?” I ask, my jaw tense with anger.

He doesn’t look sorry at all that he hit me with the ball. He is tall and muscular. His dark hair is cut close to his scalp. For some reason the “special forces” haircut suits him. He is too far ahead so I can’t see the color of his eyes, but his gaze is pulling me to him like he is made of a magnet. Jeans hang low on his hips and his white T-shirt is dirty, probably from rolling on the grass. I glance back at his friends who are staring at me, startled. Something isn’t right here—he obviously wanted to hit me on purpose.

“Well, who have we got here? Isn’t it the one and only, India Gretel?” he says loudly, like he wants to make sure that everyone hears him.

“Do I know you?” I ask with impatience, eyeing him from head to toe. A large whacky grin appears on his handsome face. Something in his eyes tells me that we already met. His eyes harden on me as he picks up the ball and closes the gap between us. He has a wide jaw and full beautiful lips.

“Don’t fucking tell me that you forgot about me already, Indi?” he asks, smirking. “Boys, let me introduce the biggest bitch that ever stepped in Braxton.”

I blink rapidly, staring at him, digging all my memories out or anything that could tell me if I’ve seen him before, but I get nothing.

“Oliver, who the hell is that?” asks one of the guys walking up towards him. Dora probably notices my little show because she approaches me, looking equally confused.

“India, who is that douchebag?” she asks, frowning.

Oliver. That name rolls in my head like a snooker ball. It curls my toes and increases my heartbeat. It’s like a poison that crawls into my pores and wrecks my body. His name brings on both good and bad within me. It’s the name that I have been trying to forget for the past two years.

Joanna Mazurkiewicz was born in Poland. She moved to United Kingdom when she was only nineteen and just finished high school. She had aspired to be a writer upon completion of the Harry Potter series but also enjoyed reading books like ‘Gone with the Wind’, ’Animal Farm’ and ‘The doll’. She graduated from Swansea University with a bachelor degree in American Studies. While studying in the UK she made a decision to start writing fiction in English.

The “Whispers of the Sprite” is her first debut novel and she is currently working on other projects. Joanna lives in Cowbridge, a small town in South Wales near Cardiff with her boyfriend Bruce. She enjoys cycling around Welsh countryside some of which has become the settings in her first series.

I could use a revange story right now