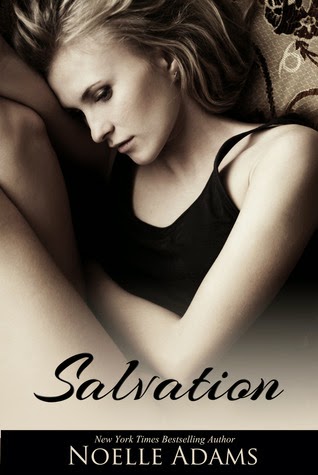 You get to the point where you can just say it. There was never anything special about me, except my father is rich and important. That's why it happened. It was just a normal Tuesday afternoon. I was twenty-three and thinking about my new designer boots. They kidnapped me for ransom. They raped me before I was rescued. My therapist says that talking about it means I'm starting to heal. I don't really think I am. It's even harder to talk about Gideon. He couldn’t save me when it really mattered, so he keeps trying to save me now. He refuses to give up on me, and I can’t make him understand. There are some things you just can’t be saved from.

Warning
Salvation is a love story that follows a difficult path of healing after sexual assault. It is a true contemporary romance, but it addresses very hard issues, including rape and attempted suicide. Please consider whether this book is for you.

I’m a little bit conflicted about this book. It treats a very delicate subject: that of a sexual assault victim’s recovery.

What I really appreciated was the warning about the contents of the book. It is not a lecture for everyone.

Diana is kidnapped from the street one afternoon by Albanian Mafia as a revenge on her father, a wealthy executive. In the short time she’s imprisoned there she meets Gideon, an undercover FBI agent who’s imprisoned as well after they found out his real identity.

A few hours later they are rescued but not before Diana is raped and Gideon badly beaten for trying to protect her.

The thing is she has never lacked for anything. Money, clothes, expensive apartment, best schools … etc… Diana is the typical spoiled rich girl who doesn’t have a care in the world and spends her time having fun with her friends and spending daddy’s money.

When she is kidnapped and abused she is unable to deal with it because it’s something she never thought might happen to her.

For a while, she becomes catatonic. No feelings, no reactions. That until Gideon tries to come back into her life. Hearing his voice brings back all those memories she’s tried to block away and she finally breaks.

It’s ugly and Diana does the one thing she thinks will end all the pain.

I’m not saying her reaction wasn’t normal. I can only imagine what it feels like to be in a similar situation and my heart broke for her over and over again.

There are no useless details or characters in this story, like friends or relatives that have no clue how to act or what to say but they stick around anyway. Everything is focused on Diana and her struggle with the pain and the nightmares.

Gideon plays an important role. He can’t get over the fact that he was unable to protect her. He blames himself and the guilt is eating away at him. He has to do something, help her at least now.

There are a lot of disturbing scenes and details but nothing over the line. Noelle presented facts: the reality of a woman who has been broken.

My only complaint is that I think she rushed the events a little bit.

We see a lot of Gideon and Diana and how they help each other heal but something is missing. I think she should have been more focused on Diana only. There are a few passages about her going to a psychiatrist but not enough details about what they’re talking about and how those visits help her.

I think Noelle should have highlighted the importance of talking to a specialist. Yes, here the focus is on how Gideon’s patience and care help her overcome her fears one day at a time but that’s not enough.

We can clearly see how easily Diana brushes him off when she’s not comfortable with his questions or his actions so that’s why I’m saying that professional help is important.

A loved one might be overcome by guilt or sadness and think that if she says she’s ok then that’s the truth but a psychiatrist knows the importance of pushing at the barriers a victim like that might have built around herself and get to the core of the problem.

All in all, it was a good book that’s worth reading if you’re comfortable with this kind of subject. I recommend it and I’m going to add some more of Noelle Adams’s books to my To Read shelf.

Noelle handwrote her first romance novel in a spiral-bound notebook when she was twelve, and she hasn’t stopped writing since. She has lived in eight different states and currently resides in Virginia, where she teaches English, reads any book she can get her hands on, and offers tribute to a very spoiled cocker spaniel. She loves travel, art, history, and ice cream. After spending far too many years of her life in graduate school, she has decided to reorient her priorities and focus on writing contemporary romances.