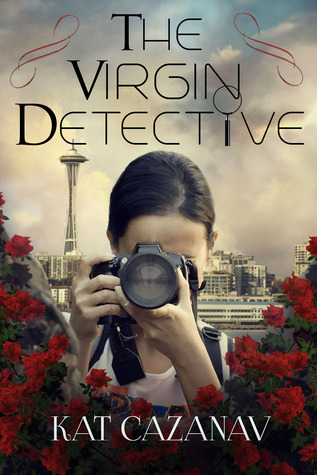 Where there are roses there’s dead bodies and no one knows this better than Poppy Rae Mamadou.

Out of college and in debt, she has no choice but to take a job at her family’s P.I. firm in Seattle. When her stiff sniffing ability leads her to a notorious homicide with kinky overtones, her life quickly spins out of control. The police label her a suspect, the media can’t get enough of her, a killer wants her dead and the good looking young detective wants a piece of her. If only she wasn’t such a Virgin Detective. As the bodies pile up, it’s up to Poppy Rae to prove her innocence but who will believe her? Telling the truth never sounded so unbelievable.

Writing this review is a little bit of a challenge. But let's start with introducing the main character.
Poppy Rae Mamadou has just finished University, she has a lot of debts and no job. The only way for her to earn some money is to join her father's PI firm in Seattle.
What few people know is that Poppy can actually smell the dead. No, it's not a decaying corpse kind of smell. To her, death smells like roses. This thing has ruined her childhood and adolescence and she hoped it was gone forever when it suddenly stopped one day.
But on her 22nd birthday, she smelled roses again and found a dead woman floating in the water near the docks. And everything went downhill from there.
Poppy keeps getting in trouble and wherever she goes dead bodies keep showing up. Her attraction toward the detective handling the murder cases makes everything even more interesting because she has to find a way to clear her name and keep him from finding out about her “abilities”. It's not such a big deal but she's tired of being labeled as weird. Even if she is.
All the characters in this book are interesting, funny and weird. They definitely can't be defined as boring.
Here's the thing. The book wasn't bad but the writing style was … confusing. Many times I had to go back and read again because I couldn't understand what was going on.
All in all, I think it could have been so much better. But we have to keep in mind that it is her first novel.
My advice for Kat is to keep better track of what's happening in the book and avoid skipping from one thing to another without giving details. Also, expand a little bit more on the characters and not jump from “we just met” to “we act like we knew each other forever”. It doesn't make sense.
Do I recommend it? Yeah, but you shouldn't have great expectations. And read it when you can actually pay attention otherwise it will be a little difficult to keep track of the events.
Will I read any more of Kat's books? Definitely! The potential is there. She just needs a little bit more practice.

About the AuthorKat Cazanav graduated from the University of California at Los Angeles with a degree in film. She went on to work in television before moving to Seattle where she now lives with her husband and two crazy dogs.

Email ThisBlogThis!Share to TwitterShare to FacebookShare to Pinterest
Labels: My Reviews, Paranormal