REVIEW and Excerpt Wish I May by Lexi Ryan 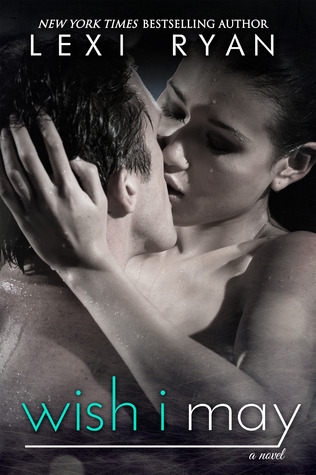 Published October 4th 2013 by Ever After, LLC

I grew up wishing on stars.
My father taught me to believe…in destiny, in magic, in happily ever after. Dreams were my scripture and the starry night sky was my temple. Then Mom stopped believing, left him, and took us with her. At the age of sixteen, I cashed in my dreams to pay the rent, pawned my destiny to keep my sisters together.

Now, seven years later, I’m returning home, grieving the death of my mother, and settling my sisters back into the life Mom threw away. I never intended to stay. I don’t want to deal with my father, who is so invested in the spiritual world he forgets the physical. I don’t want to face William Bailey, whose eyes remind me of the girl I was, the things I’ve done, and the future I lost.
This would all be easier if Will hated me. As it is, I have to hold my secrets close so they won’t hurt him more than they’ve already hurt me. But he wants to be in my life. He wants what I can’t bring myself to confess I sold. He wants me.
I find myself looking to my stars again...wondering if I dare one more wish.


My thoughts: Wish I May is the first Lexi Ryan book I read, although it’s the second book in the series. I did find some references to the first book, but there were no major spoilers and nothing to prevent me from reading it as a stand-alone. And I really loved it! I’m actually wondering why didn’t I read Unbreak Me until now!

Will and Callie’s love story is sad and very beautiful. They were high school sweethearts, shared many beautiful moments together and believed their love would last forever. And even now, after seven years apart, they share that same teenage love and even more passion.

For Callie nothing is simple any more. She has sacrificed everything back then to take care of her two little sisters, and now she will do anything to keep them from going through the things she did. But being back in New Hope and so close to Will, who reminds her of her childhood, she can’t help but indulge in what-ifs and might-have-beens: What if her Mom had never left her Dad and never made them move? What if she had taken that plane home for Will’s senior prom? What if she had never done the things she had to do in order to survive? What if there was another way? What if there still is?

Lexi’s writing style is simple and beautiful. It creates a perfect story that you can’t stop reading, and strong characters you can easily relate to. I loved them all and can’t wait to read other love stories from this nice little town. I’m starting Unbreak Me right now. I hope I won’t find it strange to learn about Will before he re-encountered Callie. I've heard that Asher is hotter than him, though I don't think it could possibly be!

I’m going to Asher Logan’s house. The thought makes me want to pinch myself and jump up and down all at once. I was planning to stay home, but Drew found out I was declining a party at Asher Logan’s house (apparently his brand-new single “Unbreak Me” is “amazeballs”). She told me she would disown me if I didn’t go and tell her all about it. So, twist my arm, I’m gonna party with a rock star.

And his girlfriend, who may or may not hate me.

Fuck it all. I could use a night out. Drew and Gabby had a good day at school, Dad’s cough is getting better after a five-day course of antibiotics and some breathing treatments, and I used Dad’s credit card to get some minimal supplies for my massage studio. All in all, I’m feeling okay about where my life is going.

When I turn onto Asher’s street, I’m surprised to see there aren’t many cars here. I don’t know what I expected. Lines of Mercedes and Cadillac Escalades? There’s a blue Mustang at the front of the drive and the Charger Lizzy said was hers, but other than that, only a pickup, a couple of sedans, and a yellow Ducati across the street.

I park along the road so I won’t be blocked in if I decide I need to jet.

A hard tap on my window yanks me from my thoughts and makes me jump. Hanna pulls the door open, eyes bright, smile covering her whole face.

“You’re really here!” she squeals, wrapping her arms around me before I can get out.

I push lightly against her embrace. “You’re kind of squishing me, Han-Han.”

She releases me and steps back to let me climb from the car.

“Dang, girl!” Hanna runs her gaze over me. “You left an average pretty girl and came back a freaking vixen!”

I feel myself blushing. I was pretty awkward during my early teen years, usually hiding in boxy T-shirts and behind my thick mop of hair. Brandon is the one who taught me how to dress for my curves and long legs. He even hired someone to teach me how to apply makeup with a modicum of skill. These, I suppose, are the souvenirs I get from a relationship I’d otherwise rather forget.

“Such a hottie!” Hanna agrees.

I turn to the unexpected deep male voice and find myself facing William Bailey. Since we’re going to be working in the same building, I guess I should get used to running into him, but I’m not sure I’ll ever get used to the heat that fills me when he looks my way.

He takes in my tattered jeans and fitted black mesh top, making me extra grateful the boxes of clothes my friends shipped from my apartment arrived today. Even so, his careful perusal is worthy of a slinky formal gown, not some outfit thrown together to hang with old friends.

My cheeks are blazing by the time he returns those blue eyes to mine. Hot blue eyes that remind me of candlelit corners, sweet wine, and his calloused fingers on my thigh under the tablecloth.

“Are you coming to the party, Will?” Hanna asks.

He shakes his head. “No, I just stopped by to get something from Maggie.”

“You should stay,” Hanna says softly. “It’s going to be a good time.” There’s something tentative about the way she makes the offer, and I’m pretty sure I’m missing something.

“Thanks, but I have plans.” His lips tilt into a half smile as he slides his gaze over me again before crossing the street. “See you around, Cally.”

Just when I thought William Bailey couldn’t get any sexier, he throws his leg over the Ducati and pulls on his helmet. The revving engine settles into a purr and, with a wave, he shoves off, and he’s gone.

“Yeah, after that we’re going to need to cancel the party,” Lizzy says. “There was so much tension between you two, it left me hot and bothered.”

Thank you for being part of my tour and for taking the time to write such a lovely review! <3 <3

I can't wait to read it! xD