Blog Tour: A Step Away by Jocelyn Stover 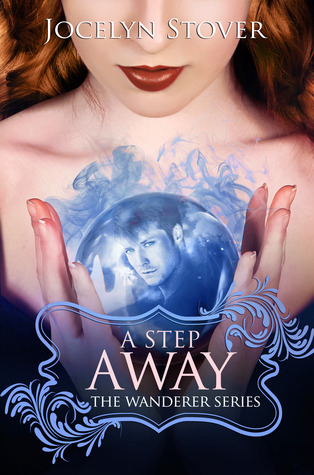 “Time...such a cruel mistress of fate. What we do with ours can either enrich our lives or destroy them, and we mortals never seem to have enough. The right time, our time, was too little and over much too quickly.”

When Gwen turns her back on a set of smoldering amber eyes in favor of a crystal blue pair, her plan is to sever all ties with the Wanderers. Her goodbye is short lived; however, when the investigation into Preston-Ward Pharmaceuticals reveals a powerful sylph has escaped. When Gwen is drawn back into the Wanderer brotherhood for her own protection she discovers she can no longer bury her feelings for Kade or ignore the growing gulf between her and Ben. As the unrelenting hunt for their ancient enemy heats up, Gwen’s attempt to straddle two worlds becomes tedious. She must choose, but when nephilim mysteriously begin to disappear her time may be up.

“Change your clothes, we’re going for a run,” Z states.

“Just indulge me.” His clipped tone lets me know there’s no getting out of this, and I can tell he’s trying very hard to keep the usual expletives and name calling that decorate his speech to a minimum.

“Fine,” I reply, not at all thrilled by the prospect of hanging out with Z. I bang around loudly while I don appropriate attire, like a toddler throwing a fit, and it actually makes me feel a bit better. Sullenly I keep my mouth shut and follow Z outside to the pavement, at which point he starts running and I have no choice but to truck it to match his long strides.

“What are we doing?” I huff after several minutes of soundlessly pounding the pavement.

“We’re finally going to have that chat about the chip on my shoulder.”

“Yes,” I admit, grateful that this isn’t going to be about me.

“What’s your deal? Why do you let that guy get to you? I know you were close when you two were Sylph but you’re an entirely different species now.” My joke about his ilk earns me a laugh.

“I was changed, yes, but my memories are still there. The angels didn’t start me off with a blank slate.”

“You guys never really talk about that, you just allude to it now and again.”

“Do you like to talk about all your mistakes?”

“Well no,” I reply floundering, the conversation steering me more than I’m leading it. “Wait!” I blurt out as a shred of higher reasoning comes to my rescue. “You feel guilty, don’t you?”

“Oh really,” he says and stops running to confront me. “I’ve killed more people than I can count… many of them children.”

“That’s just it: you haven’t killed anyone. A long time ago there lived a monster, and yes he killed a lot of people, but his name wasn't Zafir. How can you beat yourself up over something you didn't do? That you had absolutely no control over?”

Out of Reach Wanderer Series #1
Goodreads

Gwen Cohen has aspired her whole life to reach her current position of project manager at Preston- Ward Pharmaceuticals, but when she stumbles upon a dirty little secret everything changes. As she struggles with the reality of evil and her own powerful legacy, she gets pulled farther from the world she knows and closer to the one she can’t deny. Eyes finally open, Gwen struggles to unlock the dormant magic within herself before it’s too late. The lines between love and desire, and duty and commitment become exceedingly blurred and the ultimate choice to be made may not be between right and wrong but the head and the heart.

I'm a thoughtful, sarcastic, work-o-holic, mother of four. I must thrive on chaos because I've certainly built enough of it into my life already! I write during the stolen mintures of the day when the children are in bed or at school. When I'm not writing you can find me up to no good with my kiddos, or outside soaking up the sunshine.