Book Blitz and Giveaway! Only Between Us by Mila Ferrera 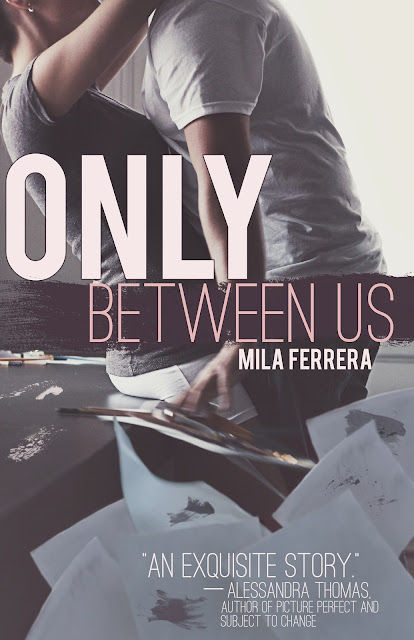 Last semester, Romy escaped from an abusive relationship with the guy she’d thought was the man of her dreams. This semester she’s putting herself back together, determined to reclaim her passion for art and for life. When she signs up for a painting class at the local art co-op, the possibility of passion becomes very real—in the form of her teacher, Caleb. Both mysterious and seriously hot, Caleb bares his soul on his canvases, and Romy’s fascinated by what she sees.

Caleb is just trying to keep his head above water. Caring for his traumatized, unstable sister is getting harder every day, and his paintings are so dark and bleak that no one is buying. Teaching classes at the co-op is no longer enough, and now he’s going to have to sell more than just his art to the wealthy, sex-starved women in his classes. But when Romy comes along, she makes everything more complicated. She sees the truth in his paintings -- a truth no one else has realized, until now.

Romy and Caleb might have a real shot together -- one that could heal them both. But when ghosts from their pasts re-emerge, determined to keep them apart, will they be strong enough to hold on to each other?

Romy’s cheeks turn a shade of pink that twists my thoughts into all kinds of forbidden shapes. I don’t know what’s wrong with me. I’ve just met this woman. She’s one of my students, not some horny sorority girl in a dark club. But I’ve been having trouble prying my eyes from her since the moment I saw her. She’s really cute, with short, reddish brown hair, big green eyes, and a tight little body, not to mention the delicate ink-work of a tattoo on her wrist. I want to slide up her sleeve and see what it says. But there’s something wounded about her, too, something that warns me not to get close. When I found her up here in my space, though, staring at my latest failure like she wanted to run her hands over it, it made me feel jittery and tense.

I catch up with her as she heads for the stairs. “I’m glad you liked my painting.”

Her posture melts a little. “Don’t destroy it. It’s exquisite.”

I feel her words behind my ribs, deeper inside than I should. “I was … just experimenting with something,” I mumble. “I never know what’s going to work out.” I poured my soul onto that canvas. And she saw it. She wanted to touch it.

Her smile is faint but sweet. “It’s working out. Go with it.”

“You know a lot more about painting than a beginner would.” I knew it from the moment I saw that dented toolbox of hers. She’s not like those women downstairs, who spread the word to their friends and come on Tuesday evenings to stare at my ass, like I’m the attraction instead of the joy of painting, of creating something from pigment and canvas. But Romy … the way she looked at her paints and brushes … it was like they were a means to salvation, and I totally get that.

She turns away from me. “I know what I like.”

God, the slope of her neck makes me want to close my teeth around it. What the hell.


Q. What was your favorite chapter (or part) to write and why?

By far, my favorite scene to write was the one that inspired the cover. Because of the chapter structure, the reader gets both Romy’s (at the beginning) and Caleb’s (as things get wild) perspectives, and because it’s their first KISS. It’s a very intense scene, and one in which both characters completely let themselves go. I love that kind of scene.

Q. Who’s your favorite character to write and why?

Caleb. He’s got all this stuff going on inside of him, but he struggles to express himself with words, especially when things get emotional (he pours all of that into his paintings). And yet, sometimes he says really insightful stuff that leaves Romy, who’s training to be a therapist, kind of stunned. He’s just a very interesting character to me, who’s been through stuff that’s really made him question his worth and strength. Of course, Romy helps him figure it out.

Q. Is there a character / characters in your books you particularly identify with?

Probably Romy and Jude in this particular book, since I know how scary it is when you first start seeing clients—you want so badly to do right by them, and are afraid of getting it wrong somehow and inadvertently harming the person. Romy really struggles with this—even with Caleb, who’s not her client.

Q. What are you working on next?

EVERYTHING BETWEEN US, another standalone contemporary romance, comes out 11/5/13. It features Caleb’s best friend, Daniel, who is also an artist. It’s on Goodreads! Daniel’s a very different character from Caleb. In his own words: “Caleb bares his soul on his canvases. I bare everything but.”

I will never write a romance series that features the same couple over and over again. I think I’d get bored of writing all that breaking up and making up, so I only write standalone novels with HEAs. That’s what makes me happiest! 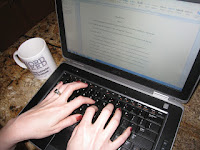 Mila Ferrera lives in New England, where she has a family and a job and does various normal, everyday things, all while plotting novels in her head. She has a passion for writing new adult/adult romance featuring psychological twists and tortured heroes. Her own psychology internship involved plenty of consultation, but alas, no sexy Swedish doctors, which is why she had to make one up. SPIRAL is her first novel. ONLY BETWEEN US, her second new adult romance, will be available 9/3/13.

One (1) ebook copy of Only Between Us Open internationally

This looks good :) Thanks!