Alex Thompson’s life is following the script. A pre-law student at Columbia University, she’s focused on her grades, her life and her future. The last thing she needs is to reconnect with the boy who broke her heart.

Dylan Paris comes home from Afghanistan severely injured and knows that the one thing he cannot do is drag Alex into the mess he’s made of his life.

When Dylan and Alex are assigned to the same work study program and are forced to work side by side, they have to make new ground rules to keep from killing each other.

Only problem is, they keep breaking the rules.

The first rule is to never, ever talk about how they fell in love.

My thoughts: I really have to start with an exclamation mark! I’ve never read a story like this before! It literally kept me attached to my Kindle from the beginning to the end, no bathroom, eating, feeding the cat breaks, nothing, and it also made me sad for not having the actual book, so I could sleep with it under my pillow – or rock in a corner with it.

And what happened to the male authors lately? A month ago I was only reading books written by female authors, and then I got my hands on Gabriel’s Inferno by Sylvain Reynard - which I totally loved and praised daily for the past month – and now is Charles Sheehan-Miles.

His story is… pure awesomeness! The writing style actually engraves the scenes into your mind. Magnificent, intense, full of emotion scenes that will haunt your dreams as if you’ve seen them for real! I’ve never experienced something so powerful while reading a book before! Maybe it’s the story, or the characters…I don’t know, but it’s amazing none the less!

"How do you say the words, "I'm sorry," and have them mean something? You hear that crap all the time, but it's not sufficient when it comes to heartbreak."

Alex and Dylan were always on different sides of the world, except for the two months they spent in Israel. That’s how they met: a trip to yet another corner of the world that brought them together. They never actually say it in the story, but I know it was love at first sight. It must have been, even if Dylan knows from the first moment that she’s way out of his league.

A tear ran down her face, and she said, “I don’t know what I did to deserve you.”
I gave her a half smile and said, “You’ve got that backwards, Alex. I’m the one who … who is undeserving.”
“Don’t ever say that,” she said.
“Why not? It’s the truth.”
She shook her head. “You’re wrong, Dylan Paris. About this, you are so wrong. We were made for each other.”

But those two months were short, and soon the both of them had to return back down to the earth with a bang. To say that they had a rough relationship after that, it’s putting it mildly.

Years later, they meet again and all the pain, the anger, the full realization of who and what they are, and especially of what they’ve done to each other and to the rest of the world hit them hard.

You’ll love the characters, all of them. Alex and Dylan complete each other. He fights to overcome his own personal Hell for her, and she’s always there to lift him up when he’s falling, even if he doesn’t want her to be. Nevertheless, they both have amazing friends who help them make the right decisions.

"Dylan," I whispered. "Stop."
He didn't even hear me. So I did the only thing I could think of. I put my arms around him, right around his chest, and buried my face against his back, and I cried out, as loud as I could, "Dylan, please stop! Please don't hurt yourself! I love you!"

This novel is what I call a perfect book! Any tiny issues I must have had with the characters or the dialogues while reading it are long gone from my mind. And I finished it a couple of days ago, so I guess I forgot them instantly, or never had them, to begin with.

“Just Remember to Breathe” is a story about true love that can survive any storm, about what family does to you sometimes, about blame and forgiveness. Choosing to read and review it was one of the best decisions I’ve made lately!

“When I'm ninety, I want you to tell me that it's my turn to ask you a question, and if that miracle happens, then my question is going to be, 'Do you still love me?' and I hope that
answer will still be yes.” 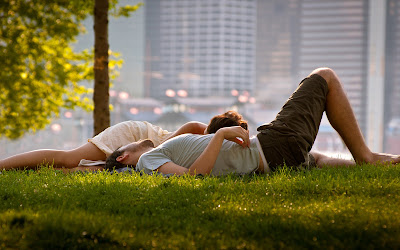 I’m reading “A Song for Julia” right now, but even if Crank and Julia are really great, all I can think about are Dylan and Alex, and how I may get another glimpse of them in “The Last Hour”, Carrie and Ray’s story. So I’m going to pray to somehow get an ARC of it, because the middle of May seems ages away.

“I’d say you’re worth falling in love with twice.”

I want to read this book right NOW! I love your review Cris, good job! xoxo