Ember operates on a no-touch policy with all living things--including boys. When Hayden Cromwell shows up, quoting Oscar Wilde and claiming her curse is a gift, she thinks he's a crazed cutie. But when he tells her he can help control it, she's more than interested. There's just one catch: Ember has to trust Hayden's adopted father, a man she's sure has sinister reasons for collecting children whose abilities even weird her out.

However, she's willing to do anything to hold her sister's hand again. And hell, she'd also like to be able to kiss Hayden. Who wouldn't? But when Ember learns the accident that turned her into a freak may not have been an accident at all, she's not sure who to trust. Someone wanted her dead, and the closer she gets to the truth, the closer she is to losing not only her heart, but her life. For real this time.

My thoughts: I’ve missed Jen…not Jen as a person – Thank God – and I hope I’ll never miss the wonderful person that’s Jen, because she’s always there, one click away, tweeting, sharing daily facts, quotes, all in all, being her awesome self. But I’ve missed reading her books – not the ones that are already out, I skim through those every time I see them on my shelf, and I think I’ll know them by heart by the time she’ll finish her first series. I missed reading something new.

When I glimpsed Cursed at the bottom of the box, my heart stopped! I thought I was seeing things, was I high on Coca Cola Zero? No, I was not, it really was there!

The hardest thing for me to do was picking my next read between Cursed and Deity! After hours of looking at both at the same time, weighing them one in every hand, swapping them from a hand to the other, analyzing every inch of them, and debating with my friends, I finally decided to start with Cursed, just because I’m sure I won’t be able to get into anything else for quite a while after reading Deity.

Ember’s last two years were a constant struggle. Her dad died in that car accident, she died there too and her little sister, Olivia, who was only three at that time, brought her back to life with her gift. But she came back with a curse. Ember can’t touch anything and anyone without killing them, not anymore.

When she meets the Cromwell family, things seem to get even worse: almost all of them hate her, including the adopted father, who’s determined to send her to some sort of Facility is she can’t control herself. But Olivia really likes the Cromwells, she wants to stay with them and it’s the first time in two long years when she’s happy. And then there’s Hayden, the only one in the family not hating her. More than that, he doesn’t think she’s cursed, he’s determined to help her control her new talent, and he’s so cute! The best thing in the world would be to hold her sister’s hand again, and to be able to touch Hayden, kiss him…

Ember has a strong personality, she’s really brave and mature for her age! She’ll do anything to protect Olivia, to give her a chance to have a normal life. But she’s also funny, coming with some smart-ass line when
you least expect it. This is what makes her what she is: one of Jennifer’s girls.

I really was Death in sneakers.

Happy-Meals – the unofficial way to a child’s heart. How devious of this Ms. Liz.

“And you’re not going to the dance, either?”
I yawned loudly. “No.”
Cory shook his head. “I thought you girls lived for that kind of thing.”
We did – I did – but my date (if I had one) wouldn’t live through the night, which kind of took the fun out of it all.

Hayden… Oh you’ll love him! Who wouldn’t? He’s incredibly smart, sexy, and determined to help Ember improve her life. He’s there for her when she needs him most. He also has this great confidence in all the people he cares about.

“You worry about hurting me, but you never seem to worry about me hurting you. And I’m the one with the killer touch.” – Ember

All the characters in Cursed are very expressive and natural, and it’s easy to relate to them. You’ll love the Cromwell siblings, sympathize with them and understand their behavior, because life hadn’t been easy for any of them. You’ll even start to like their father. I wished with all my heart for him not to be involved in the nasty part of the events in this story.

I also loved the setting! Can you guess where the action takes place?? I bet you can’t! It was such an awesome surprise! All Jennifer’s fans will definitely love the familiar setting!

I laughed weakly. “It’s a town called Petersburg. I’m in West Virginia, Adam – West ‘by God’ Virginia.”
“What?” he shouted.
“You know the place where that movie about the incest hillbillies was filmed? Remember, they like ate people or something. You said the one guy with the gross hands reminded you of our gym teacher?”

This book was great! Awesome! Spectacular! I loved it so much! It’s different from the other books written by Jen, that’s why I love it even more! I recommend you read it ASAP! 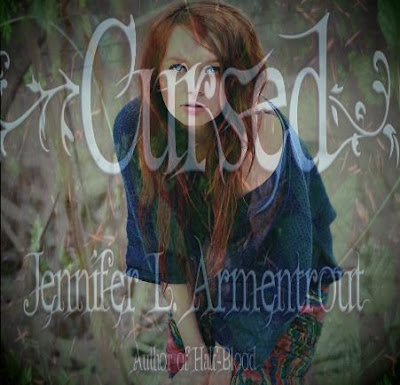 Don't miss the chance to win some awesome prizes offered by Spencer Hill Press. Prizes include a $25 Amazon giftcard, a copy of the book, a shirt and lots of SWAG!

Omg... she has a terrible curse but I really like the idea. After this review I want to read the book soooo much!!!!! I think it will be as good as Obsidian.:D

This book was so awesome!! I really enjoyed it too. I thought that the characters were really great. Fabulous review! I love the quotes you picked.

Really looking forward to reading Cursed. Thanks for the awesome review <3

The book sounds great! I will read it just to find out how Ember deals with her curse. Killing people with only one touch... this must be the most horrible curse I've read about until now. It made me very curious.

I cant wait to read this book!!! Love Jennifers books :)

It really was a good book. Can't wait to read the next one!

Eep! I've missed reading a JLA book too. I can't wait to get my fix!:D

I've tried to stay away from reviews and teasers until the release date (I'm not a patient fan), but your review is awesome, as always, and now I'm super excited about this new story and cast of characters. I always love the unique voice Jen gives her characters, and I'm glad Ember has that. I can't wait to meet Hayden and to learn everything about this curse.

Thank you so much for the chance to win! I really cant't wait to read Cursed!! *squeals*

Can't wait to read Cursed! Thanks for the giveaway!

Ok, now I really want to read this! I'm glad to try any paranormal book, and I love the fact that it is a stand alone one, because I'm hooked by too many series now... Thanks for the giveaway!

I'd really like to read this book, it looks very interesting.

Thank you for this awesome contest !
I hope I'll win and have the chance to read this awesome book :D
Aww and I want that shirt, too :)

Can´t wait to start reading cursed, it arrived this morning so im super excited about my nextread thanksfor an amazing giveaway

Ahh so excited to read Cursed!! :)

It sounds like an exciting book. Thank you for the contest!

This book has a different subject, the winner will be very lucky!

With all this fuss about this book, now I want to read it, especially because it's written by Jennifer. :)

This book is AWESOME! I really want to read it. It's already on my TBR list. And I like very much Jennifer and I love her other books! She is a great writter! :x:x

I want with all my heart to read Cursed ! I read the goodreads description and it made to want to read it !

I'm looking forward to read this book. Thanks for the giveaway!:D

I hear about this book and I really want to read it. I loved your review. Awesome giveaway

The review is very good.I really want to read this book.

I want to read this book and this by the way, is an awesome review!

I want to read this book and this by the way, is an awesome review!

Great review, great giveaway, and obviously, the great Jenn with her awesome books :D beautiful cover for `Cursed`, too .. the winner will be a very lucky one :D

I may like this book as well and I don't know if it's a healthy thing or not.
I always loved the dialogue in Jen's books, it's funny.
Damn, I think I want this book. I'll need to move in a cave so I will not be tempted anymore.

great review and giveaway,thanks for the chance to win!
I really want to read this book !

Must be a really good book if is write by Jenifer L.Armentrout